When it was new, the Unipower GT was a frequent visitor of motor shows, with the last works appearance in October 1969 when the Mk2 version was on display at the Earl's Court Motor Show in London. There is a lovely little promotional film by British Pathé, which I don't think I have ever included here before (Unipower from 1:26). The narrator: "The Unipower GT can be purchased in kit form for as little as 375 pounds or complete at up to 1,500 pounds. The fibreglass body incorporates a right hand gear shift."

Now, just over 50 years later, there is no doubt that the Unipower is a real classic and therefore it earns its place at the Classic Motor show in Birmingham. No less than three cars are on display this weekend: Tim Carpenter's chassis number 1, Gerry Hulford's racer plus Keith Hamer's car that has turned out to be the prototype as it was seen at the 1966 Racing car Show in London. I hope to be able to write a little more on that soon. 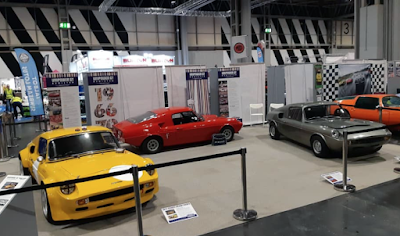