When Karsten Stelk sent me an old image of a Mini Marcos being raced he added 'Hope a new one for you...". Well, it was as I'd never seen this picture before and didn't know anything else about it. Thank you very much Karsten, but was there any more information available? All that he knew was that it was an original picture (no reproduction) which he'd bought together with three other 1967 Le Mans photographs.

The hunt for more information was on, and I received help from several others. First question: was this even Le Mans? Despite the Dunlop bridge I wasn't very sure about that. And I wasn't on my own. After scoring out all the possibilities (there has been a great of number of Dunlop bridges in use on racing tracks) we concluded that this had to be Montlhéry. And Gérard Boulin was the one to confirm that, coming up with a very similar picture of another race, taken at the very same spot at Montlhéry.

After that it was a matter of searching at races held there at around 1967 - aided also by the Ferrari 250 Le Mans of Scuderia Filipinetti. Eventually I found that this picture was taken during the Grand Prix de Paris of 12 May 1968 at Montlhéry. Peter Raphael drove the Mini Marcos there and I'd love to find out a bit more about this. All I could find is a hazy picture of the car in Portugal with a lorry of 'Gontune Racing'. Who's next? 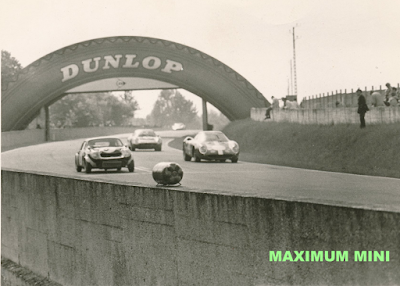 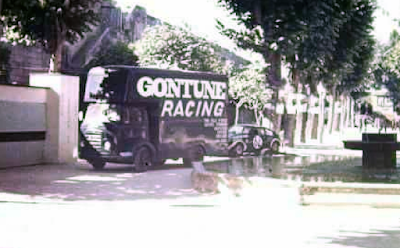 Englishman Peter Raphael raced his Mini Marcos in the 1967 season throughout Europe, here in Portugal. Who knows more about the man and the car? Was Gontune Racing Raphael's business?
Picture courtesy Team Mini Blogspot