Thanks to Daren Worboys I have now come in contact with Jason Rooth, who is the current owner of Project X - Maximum Mini's Best Find of 2019. I asked Jason to tell a bit more on how he found the car. This is what he wrote:

"A friend of mine (Ivan Glasby - RIP) was a custodian of it for many years. He showed me it and asked if I knew what it was. I didn’t have a clue. After that visit to Ivan I then bought every copy of the magazines (Sports Car World) that were to do with Project X. There were a few stories that I heard of how he got the car but what I think is right is... a guy in the garage across from him had it out the front of his shop in the weather for a while. Ivan took a look at it and first noticed that it had a Mini front subframe in the rear - mounted backwards. He was then interested in keeping it out of the weather. The guy let him take it home to store it. It was there for at least 5 years - that I know if. After Ivan passed away his son tried to track down the owner. Which he did. I met the guy who told me that it was originally destined for garden art - as it meant nothing to him. I made him an offer and bought the car. Since getting it home I tried to find out more info on the car. I also wanted to track down Mike McCarthy. I found out that he had passed away. I remembered a post on the Ausmini forum where a guy had the front headlight buckets. I messaged the guy on the forum with no luck, so I looked in other places. I think that I stumbled across your site with Daren's name. I then found him on Facebook and messaged him. After chatting he filled in some blanks and posted me the headlight buckets. Now I am looking for parts before I start restoring it."

It turns out that Jason is a great Mini enthusiast who bought his first Mini 20 years ago: "I have around 19 now. Mostly Mini-matics. I live in Melbourne, Australia and I’m starting a business (Grouse Garage) that will create turn key Minis - ie completely restored Minis that people can hop in and drive. Modernized with air-conditioning, power windows, power steering and a good audio system." Seems to me that the car is in very good hands. Thanks Jason, please keep us posted! 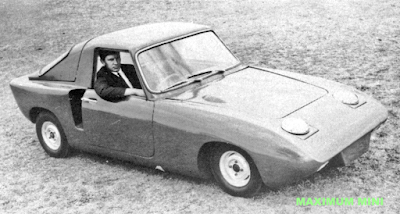