You've read all about the discovery of a Deep Sanderson in Mexico-City (here) and the considerations of the man who found it (here) - now over to the man who bought it, with bits and pieces from the messages I received in the last two weeks or so:

15 February: Dear Jeroen, as Henry said, my name is Victor Milke. He found the car and evaluated purchasing it for himself, but I am very grateful to him that he is letting me purchase it. I have been looking for a Mini, which are rather rare and expensive down here... but to my surprise, this Deep Sanderson 301 not only fits the bill, but is also a very attractive one and with a great marque history and rarity! It seems like a very good car that perhaps with a good cleaning and recommissioning can be put back in the street. That is what I intend to do, at least that is the plan for the time being and even before seeing the car in person... performing a sympathetic restoration, aiming more to getting a nice usable little car in the end than a racing car or a beauty queen. I believe cars were meant to be used. I should have it in a couple of weeks and will send more detailed pics of whatever interesting bits I find, numbers or anything that you may consider useful to try to determine a bit more of the car's history, in case you could help me a bit with that.

16 February: It is apparently fitted with the 1960 Morris Minor engine of a car that was sold originally in 1960 in Mexico and was registered to that car's original papers. Unfortunately there is not much history on the car's papers, from what the seller tells us, but I will find out once I get it and update you with any interesting info.
25 February: Dear Jeroen, the car is being picked up today but will be stored at a friend's place for a couple of days before making the trip to me. Once I get it I will give it a good cleaning and make a through inspection of the car which may tell us a bit more about it. I will have better pics for you soon... and I will be trying to find out a bit on history about it. The invoice has the past owners mentioned and signing on its back (that is how you transfer property down here), and I will try to locate some of them to see if I can find out something about it. The invoice, as I believe Henry or me mentioned, is really from a 1960 Morris Mini 850... surely that car was scrapped with its mechanical components used to assemble the Deep Sanderson on an original kit car that was somehow imported into the country. That is my theory.
26 February: I am a purist and will prefer to do the car as a kit car for a sporty and cute toy... and not a racer. Therefore, no Minilites are on my scope, but the original wheels and hubcaps and I would love to see your pics of the dashboard of that particular car or any other original pics that will show what the cars used as interior light switches, etc... as I would would love to find suitable original type (probably Lucas) bits and pieces.
26 February: The car is stored at my friend's ware house in Mexico city now, just at the exit to the highway there... and one hour or more away from where it was this morning. I live 2.5 hours further north, but we have road repairs and the trip could take very long. I never went to see it and trusted Henry with his description and pics.
1 March: Dear Jeroen: The car arrived. I am pretty excited! It is a bit worse than what I saw in pictures, in the sense that I need to do everything... I was kind of dreaming that I could save the paint or interior, but no, I will have to do them... But the car looks pretty complete, not damaged or tampered with... so it is basically a great little project. We are doing a good initial cleaning and I will then be able to look at it better. Rat excrements made me not want to get inside and look at dashboard and details.... but I am attaching a few pics for you to see a bit more of the car. Later today, I will install a battery and start looking at what those switches are for.
1 March: I would surely love to get a new wiring loom. But I wasn't sure if a Mini one would work, as this one has additional instrumentation and car size may also play a trick... it looks like headlights are far away from dashboard, at least comparing with a Mini. I was thinking of doing a new wiring installation to measure, trying to make it look as original as much as possible. For the time being, I will keep the engine it has... but I need to find the correct carburator. Currently it has a terrible installation of a Japanese unit and a water tank in the place where the carb should have been.
2 March: Those holes in the front bonnet (probably Buick fender portholes), will be the first thing to go, once I paint the car. I am considering Primrose Yellow... to try to resemble the prototype ARX2, but I don't know yet. Yes, the carb will need to be replaced for originals, horizontal or twin SUs, don't worry. And I will have to find out what could be correct before that. Great that you tell me on the Mini wiring loom. I will get one soon, and also the interior switches and bits. Thanks again for all your help, Victor
So there we go for now. The car's history is still pretty much shrouded in mystery, but I'm sure we'll be able find out more. If anyone does have more on the background of this car in Mexico or wherever before, please get in touch. Myself and Victor would surely much appreciate that. 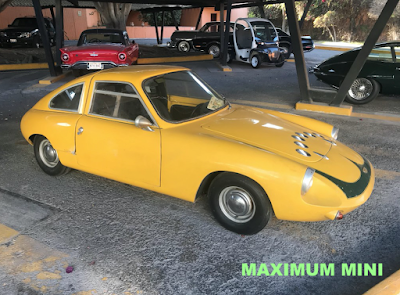 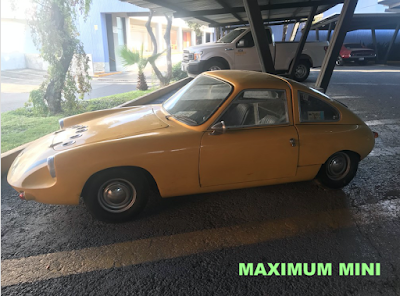 "I was kind of dreaming that I could save the paint or interior, but no, I will have to do them... But the car looks pretty complete, not damaged or tampered with"
Picture Victor Milke 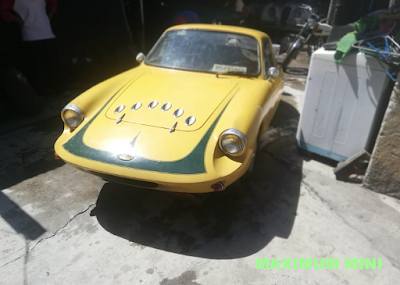 About two weeks earlier: the car is moved into the daylight for the first time in many years
Picture via Victor Milke 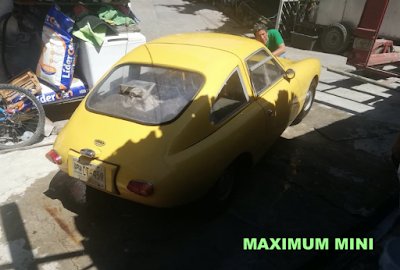 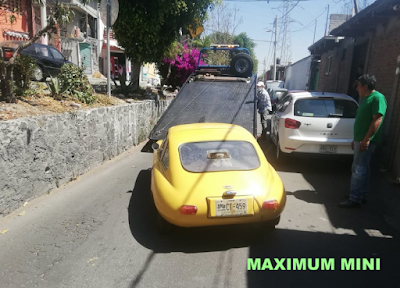 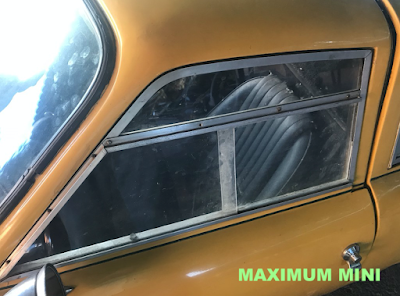 "The car looks pretty complete, not damaged or tampered with... so it is basically a great little project"
Picture Victor Milke 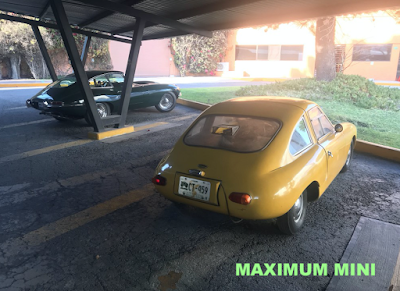 It will be in good company, too. Victor owns a number of other classic (sports) cars
Picture Victor Milke
Geplaatst door Maximum Mini op 12:10