A Dutch Barclay Mini Bug (that's a Stimson built under a license in The Netherlands) appears to have been hidden from the public eye since 45 years. The car was bought second-hand in 1972 by Giel Brouwer from the man who'd originally build it. Giel still owns it, although there's an unusual story attached to the car.

He told me: "My dad had a large US campervan at the time, some eight metres in length. He took that for a holiday to Marbella in Spain. I was in for some fun and wanted to bring a boat or a scooter or something else along. I did manage to find a speedboat but then I bumped into this buggy also, pretty local too. I made a construction on a twin-axle trailer so that both the speedboat as well as the buggy with the windscreen hinged forwards, could be towed behind the camper. It was quite something."

After the holiday trip Giel used the Barclay Bug for another two or three years, when he put it in storage. But there things went wrong. A friend, who had been eager to take the Bug over from Giel, suddenly saw it at the local trailer camp. Giel: "He was kind of pissed off, thinking I'd sold it to someone else. But when I told him I hadn't, we didn't know how quick we needed to go and have a look at my storage. There had clearly been broken into. And the car was gone. We found it in the trailer camp where they'd hastily blown it over in a metallic blue paint. The police wanted to have nothing to do with it and so we went there with a few friends and took it back. I decided to take it apart then as I wanted to restore it and repaint it back to its original orange, but it never happened.

And so today the car comes in crates and boxes, but is believed to be complete. Giel may be tempted to sell it but only for the right price and preferably together with a Mini he's had for equally long. He says there should also be pictures - somewhere - of the motor caravan with the twin-axle trailer behind with the Bug and speedboat on that. I'd love to see those, too. 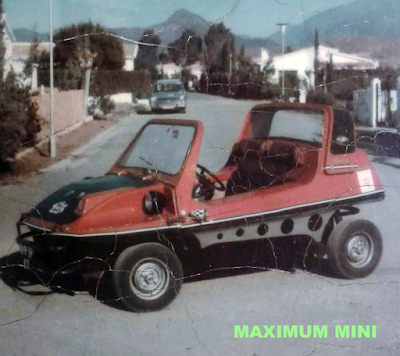 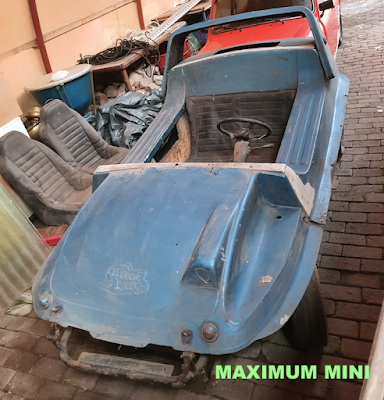 And found back like this in a trailer camp nearby, hastily blown over in metallic blue
Picture courtesy Olivier Bos 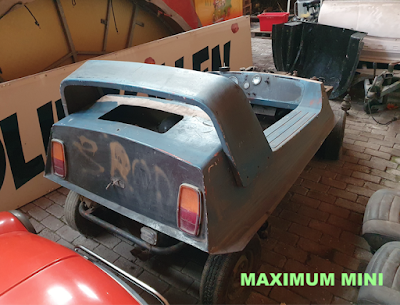 That was 45 years ago. Despite plans to revamp it, it hasn't moved a wheel in all those years
Picture courtesy Olivier Bos 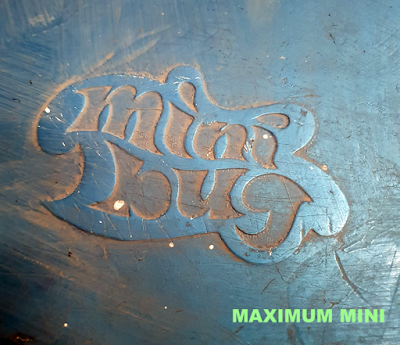 It's a Barclay Mini Bug on its Dutch registration, but oddly comes with a Stimson Mini Bug bonnet
Picture courtesy Olivier Bos 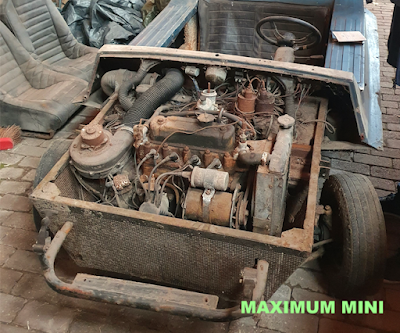 Engine is a standard 850 of 1967-vintage. Rusty and dusty, it will need work, oh yes
Picture courtesy Olivier Bos 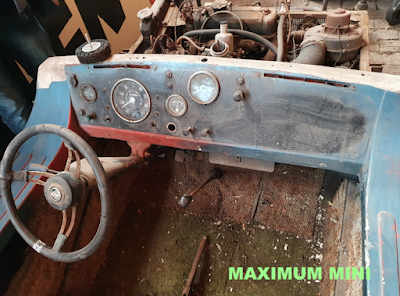 Simple dashboard blown over in blue metallic, too, but the Bug is still fully complete
Picture courtesy Olivier Bos 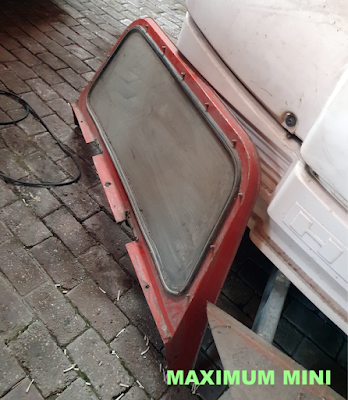 Windscreen still there in its original orange hue. It was modified to fit with speedboat on trailer
Picture courtesy Olivier Bos
Geplaatst door Maximum Mini op 15:01