Another mystery solved. This pretty Estate turns out to be the work of Les Clarke, who was a 29-year-old work study engineer with the commercial division of BL at Longbridge back in 1973. That's when his car was featured in Terry Grimwood's column 'TGs Home Brew' in Car & Car Conversions magazine.

Clarke had bought the 1964 Traveller for 100 pounds and used it some four years before the transformation started. That rear door is not a fibreglass unit as several were offered in the 1970s. No, Les took the rear end of a Mini Pick-up, welded that on the lower part of the Traveller door space and made the top opening door from a piece of heavy-duty tinted Perspex in an aluminium frame. The rear window is a heated Smith screen, the rear wiper from another Mini and with Imp bonnet stabilizers to hold it up when opened. Rear light units were indeed sourced from a BMW 2000 T. Lux.

Inside there were re-upholstered Cooper recliners and a leathercloth covered dashboard with home-made centre console. Clarke also fitted a 1275 engine with Innocenti cam, Sprite head, lightened flywheel, tuftrided crank and high-compression pistons as well as disc brakes. Graeme Farr was the man to dig out the article. Terry Grimwood added: "Hah! You'd think I would remember. Must be an age thing!" A massive thanks to Graeme and Terry! Now, over to the next question: does it survive..? 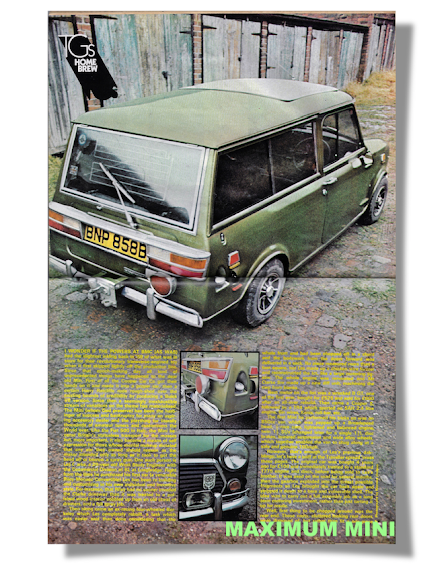 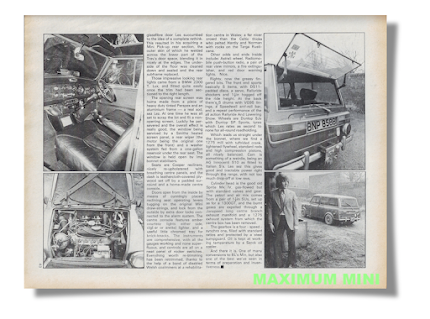 "At one time he was all set to scrap the lot and fit a non-opening screen. Luckily he persevered"
Picture CCC magazine via Graeme Farr 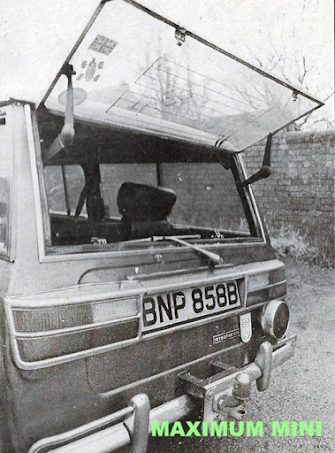 The lower part is from a Mini Pick-up, while the rest was fully home-made
Picture CCC magazine via Graeme Farr 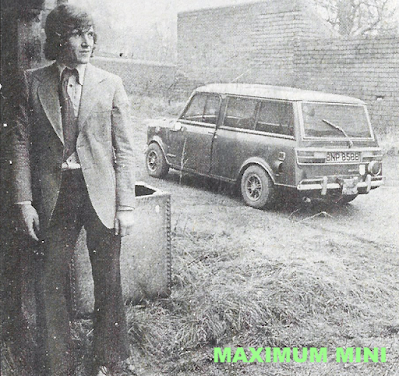 Les Clarke with his special Mini Estate back in 1973. Do they survive..?
Picture CCC magazine via Graeme Farr
Geplaatst door Maximum Mini op 10:52