Following yesterday's discussion with Edgar Salwegter of ESC (here), I was eager to find out which of the Status Minipowers had been the one that made it over to New Zealand. Edgar recalled it was red and was seen in a book. There had been two red Minipowers in a number of publications, wearing the registrations 'PNG 433M' and 'VCL 738K'. We found out it was the latter, as seen in Peter Filby's 'Amazing Mini'.
Edgar bought the car in The Netherlands, took only the chassis to New Zealand and... scrapped the body! Edgar: "Then it became the white ESC in NZ. At least you know what happened to it. I will try and find out what happened with the next chassis in the jig."
A couple of days later he came back: "Hi Jeroen, I spoke to Angus Fogg and he has the jig for the chassis, but he does not know where the spare chassis went to. We have an all-Brits and Euro car show this weekend I will have a look and see for any new things pop up in the mini section. Angus also said he has had a few e-mails from you before."
That's right. I'd contacted Angus before about one car in New-Zealand in particular, which I had labeled as a Minipower also (this one) and showed Edgar the pictures, too. He replied: "It does look like a Status chassis from the pictures, looking at the top arm and chassis. The chassis was ahead of its time back than, with the inboard suspension. But we can rule it out as an ESC." That makes two Status Minipower-related mysteries in New Zealand. Who knows more about them..? 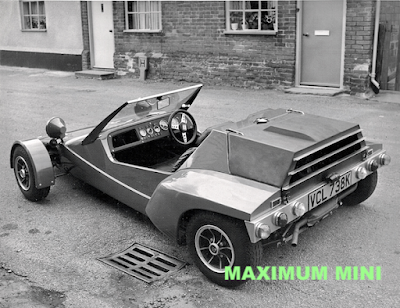 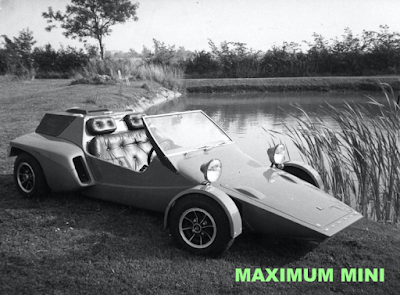 Peter Filby famously drove it for several of his articles, but it was also seen in a brochure
Picture Jeroen Booij archive 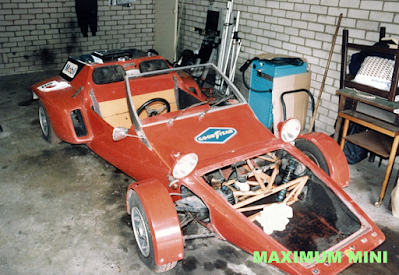 Here it is when it was owned by Edgar - just before the body was sent to the scrappers..!
Picture courtesy Edgar Salwegter 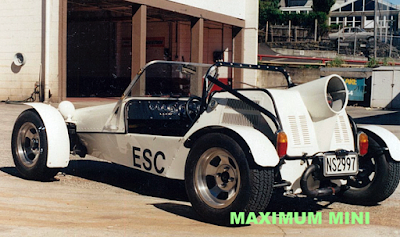 The chassis was re-used in the first ESC, now with an aluminium body
Picture courtesy Edgar Salwegter 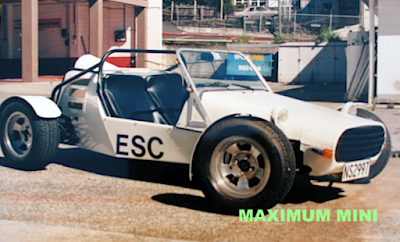 The wherabouts of the car remain unknown today. Do you know where it is..?
Picture Jeroen Booij archive
Geplaatst door Maximum Mini op 14:14