Professional car designers coming up with Mini based vehicles? There are a few that I know of. Rolls-Royce and Bentley chief designer Graham Hull made this one in his spare time, Duesenberg, Ford, Tucker, Cord and Chrysler designer Alex Tremulis was heavily involved in this wacky creature, while this contraption was supposedly made by a Porsche designer. And another exciting Mini derivative can now be added to the list.
Some three years ago I received a message from Penny Lockwood. Penny's father in law had just passed away and she was looking for a new home for his Elswick Envoy. It didn't take too long to find that, but in corresponding with Penny it soon turned out that her late father in law, Ted Laban, was a most interesting man. She wrote: He was a car designer, mainly chassis design and had a very interesting career. He was a Coventry man and worked for Jaguar and Reliant. He took early retirement when Jaguar was taken over by Ford but continued to work for a while on other projects. In retirement, he worked on the chassis designs for LTI (London Taxis International) including the wheelchair ramp. He also worked on designing a unique Bentley capable of 200mph for the Sultan of Brunei, of which only 6 were ever built. And for Gibbs he designed an amphibious car suspension that lifted the wheels in true James Bond fashion, enabling it to achieve waterborne speeds of 35kts. He also undertook work for FF Developments, a company started by Harry Ferguson of tractor fame and concentrating on four-wheel drive systems. So as you say an interesting man!"
The real surprise was another Mini based car he'd designed back in the 1960s. Penny wrote: "You might also be interested to know that my father in law had an old yellow Mini where he'd converted the back using fibreglass. The Mini was a 1962 Mini Van before my father in law converted it as part of his HND apprenticeship programme with Jaguar. His concept was to create a car which could be parked end-on into a regular street parking space. A Smartcar before its time! The conversion involved fibreglass, which at the time was apparently pioneering! I thought I'd just let you know that we are now selling his converted Mini at the Earlswood Classic Car auction on 11th June."
Previously registered '131 FOX', the Mini Van looks to be in a great condition and I hope it will go to a good new home. Thanks Penny for getting touch and all the best of luck with the sale! 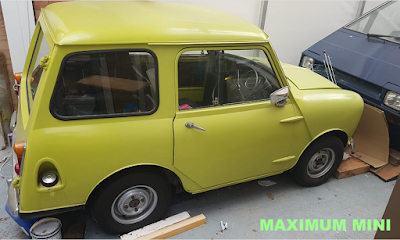 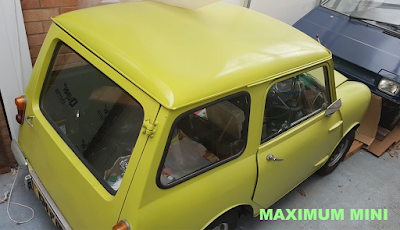 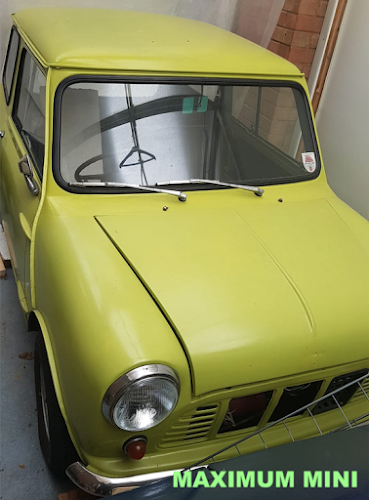 Based on a 1962 Mini Van, the car has been in the Laban family for over 50 years
Picture courtesy Penny Lockwood 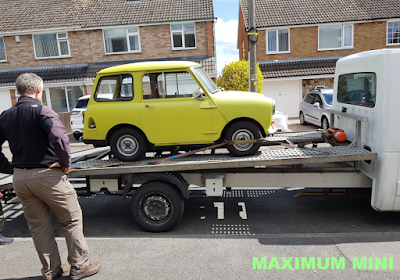 But... it is off to a new home soon as it will be auctioned in June
Picture courtesy Penny Lockwood
Geplaatst door Maximum Mini op 11:38