A year ago I told you about the Siva buggies built in The Netherlands (see here). I haven't been able to find out more about the location in Amsterdam where these cars were built. However, there was a second British Mini based buggy that was built under a licence in The Netherlands: the Stimson Mini Bug, and I did find out a bit more on that since. It started with an old advertisement in a Dutch magazine for the 'Barclay Mini Bug'. In Dutch, it said:"Reuse your old, rusted or damaged Mini to build such a terrifically hip Mini Bug. Barry Stimson's Barclay 'Mini Bug' is offered as a kit including a tubular chassis derived of Formula One cars. All you have to do is bolt your subframe with its engine plus rear wheels on to this chassis. Available in many colours. Kerb weight around 320 kgs. Mini Cooper performance with installation of ordinary Mini 850 engine. Very good road holding. Price including tax 2,450 Dutch guilders" 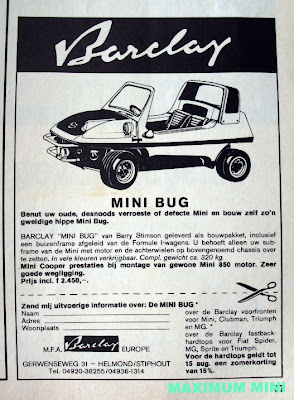 Some time later Stimson owner and fan Paul Wylde (web site) sent in some pictures of a Barclay Mini Bug that resurfaced in The Netherlands. The new Dutch owner of the car wrote to him: "It was found in barn 4 years ago at a farm of an old man who had lots of Minis and parts. He tried to get it registered in The Netherlands in 1971 but failed and never tried again. Someone tolt me that he had 6 kits in 1971." Paul added to that: "Note the badge on the front plus the lack of a lip around the car like the one in the ad. Did you find anything else about Barclay?"

Funnily, it was only some weeks later that I met a chap who told me he knew the man who built these Mini based buggies back in the early 1970s in the village (Helmond) where he lived. Believe it or not but this was purely coincidental! In fact the builder appeared to be still living at the same address as he did back in the 70s. Anyway: I rang him and, yes, he was the guy who built them. But unfortunately he was not the chap who'd bought the rights from Barry Stimson to build and market these buggies, and was just contracted to build them. And, no, he had no pictures, and had lost touch with the man I was hoping to speak to. That man, in fact, passed away some 10 years ago, and his son moved to another part of the country and - you guessed it - he has not been in touch with him since. He did believe he built 5 or 6 of them though, contrary to the 12 kits that are said to have been fabricated in The Netherlands. But that's were the trail of the Barclay Mini Bug ends. At least for now. 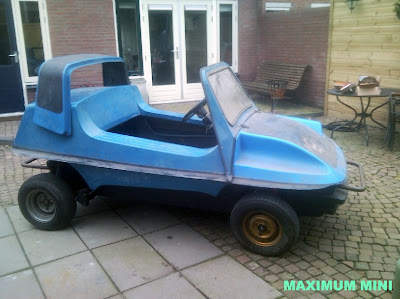 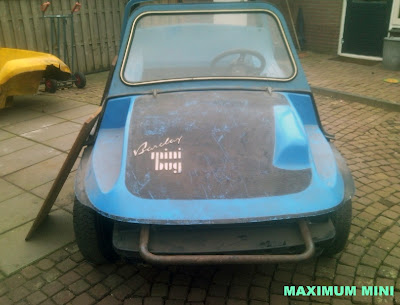 According to one source 12 kits were fabricated. Its builder says there were only 5 or 6

Dutch logo left, orginal Stimson logo right. Both are moulded in the bonnet