The Peel Viking Minisport, born on the Isle of Man's west coast in 1966, is one of the quirkier Mini derivatives. So you may not be surprised to learn that I like it very much. However, you don't come across one for sale often with just 24 cars built by Peel Engineering and later on by Bill Last of Trident Cars, and very few survivors. But that may change now that the moulds for the thing have come up for sale on eBay! See the ad here. The seller, who has produced a few bodies from them and told me he now needs the money to fund another project, writes: "These are genuine moulds bought from the Isle of Man a few years ago (...). They consist of top and bottom halves which bolt together, bonnet, doors, dashboard, rear parcel shelf and detachable door flange recesses. The 2 main top and bottom moulds are steel reinforced. (...) This would be a great business opportunity for someone with GRP laminating skills, either offering fully built cars or bodyshells only for people to complete using an old Mini for parts. Under the current DVLA/VOSA donor vehicle points system, you would be able to use the donor Mini V5c and registration therefore avoid having to SVA the car." Peel fans, go and safe guard these moulds!

UPDATE 21 November 2011:
I've had a few people asking about the claim the seller of these moulds makes about registering newly built cars. Richard P. mentions: "Can you verify this? As far as I am aware the points system dictates whether you can keep the donor registration, not whether you need an IVA test (which replaced the SVA test). If you are building a new kit car then it needs IVA unless it uses the complete chassis or tub of the donor (the floor pan in the case of the Mini). Richard H. adds to that: "The guy selling them must be a silver tounged charmer - I like his claim that they can be used to reshell any mini with no need for an SVA test - he must be stuck in a time pre-1998, as there is no way that a) you can do this anymore, and b) they wouldnt pass an sva test anyway - the headlamps are too low (one of the things that did the old GTM Coupe in when the SVA came out!)" Thank you very much for that, chaps.

UPDATE 13 September 2018:
The moulds seen here are a later set. The original moulds made by Cyrill Canell on the Isle of Man in 1966 have now emerged and are back on the island. Full story here.

UPDATE 14 September 2018:
'Original' moulds and the set seen here appear to be one and the same. See here. 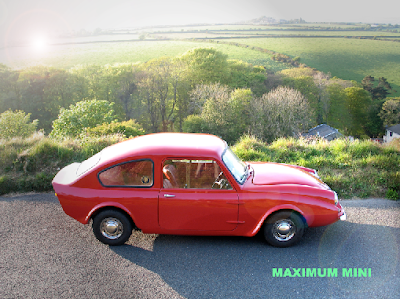 A Peel Viking Minisport on the beautiful Isle of Man in June 2007
Picture: Jeroen Booij 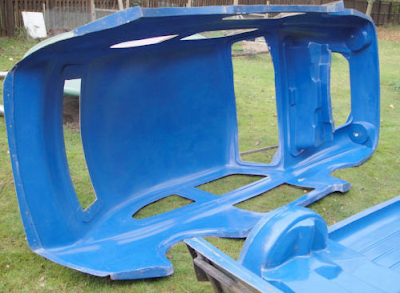