It is certainly no secret that Enzo Ferrari was a fan of the Mini. In fact he used an Austin Mini Cooper privately in the 1960s and according to some sources it was delivered to him personally by Alec Issigoinis. A few pictures of him with the car (and Issigonis) are known, but the thing that strikes me is that the Mini appears to be modified, or even coachbuilt. Just have a look at the faired in driving lights and replaced indicators at the front to see what I mean. And was that the only modification? The light metallic paint job may refer to more mods, as do the quarterlights in the doors.

But who carried out these conversions? I never found out. But more recently I came across some pictures of the Ferrarina (a stillborn Ferrari project for a small car that was built in a coorporation with Piero Beretta, president of the gun manufacturer - more here) and noticed the headlight arrangement of that car. It is about similar. And it dates from the same period, too. But which carrozzeria was responsible for the Ferrarina? No one seems to know. So there we go. I reckon there is a link between Enzo Ferrari's coachbuilt Mini Cooper and the Ferrarina, but which?

UPDATE 30 November 2011:
As Jens Christian mentions in a comment below it appears there could have been more then one car. Paul Mellor thinks so, too, noting the indicator on the second picture of Enzo Ferrari's Mini looks further forward on the wing. Another interesting note came in from Alastair Brown: "Hi Jeroen, I see you are asking about the body of the Beretta Ferrarina on the blog. You have the photo from Graham Gauld's excellent 'Modena Racing Memories' shown, and in my copy, page 105 states that the Ferrarina which the Berettas saw was "in fact a bit of a mock up cobbled together by Pinninfarina using the chassis from a Fiat 1200 using some body panels from Fiats small sports car" Pinninfarina would be the obvious choice for Ferrari of that period of course. However, it seems a further sports version was built on a Bizzarini designed chassis and displayed on the Bertone stand at the Turin show in '61. don't know what it looked like though, but my guess would be that it looked like the ASA which it became. Hope this helps." I'm sure it does. Thank you, Al!

UPDATE 19 February 2014:
Is this it? It surely looks similar, but I'm not sure. Click here 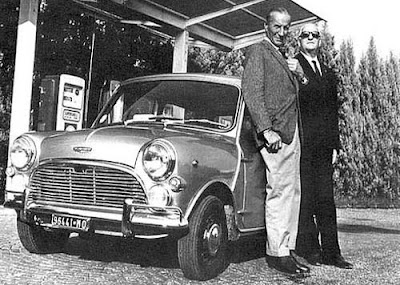 Famous picture of Issigonis and Ferrari with the latter's Mini Cooper 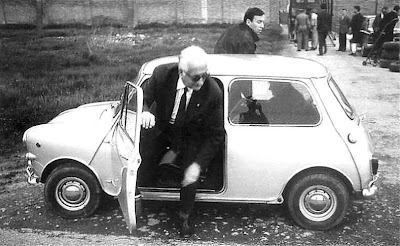 And another well-known photograph of Ferrari and his Mini Cooper 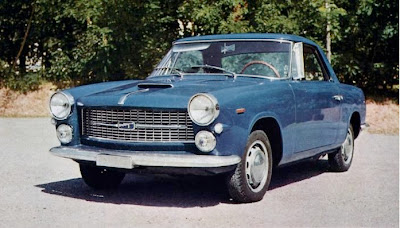 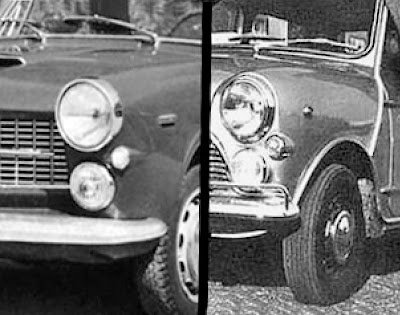 Note the similarities in light arrangements. Who (coach)built these cars?