Very few cars have been haunting me the last years as has the Lawther GT. Pardon me? Well, how about a nicely proportioned ultra low sports car with its Mini engine at the back, all designed and built by a motor sports enthusiast who later became a helicopter designer? Oh yes. The Lawther was built in 1967 by Robert Lawther and originally used only an 850cc engine, but is said to have been able to reach the 100mph mark at 6000rpm. The 850 engine was later replaced by an 1100.

I got quite far. One former owner sent me some splendid period pictures from the time when the thing was just finished; another sent a huge stack of photographs from the time when he owned it, plus there are some superb shots from Cars and Car Conversions mag that I have copies of now. In fact the file that I have on the Lawther GT is vast. But there is one thing missing: details of the Canadian who currently owns it. 'Cause that's where the car went in 2004 with the intention to fully restore it on that side of the world, or so I am told. And that is where the trail ends. I have contacted several Canadian sports car clubs that may know car and current owner, but even the very helpful chaps at the VARAC have all drawn a blank so far.

So before it drives me mad, please, Canadians, anyone. Lawther GT, where are you?

UPDATE 30 November 2011:
Somebody told me the car was sold last year... in Canada, but doesn't have any further details. Hmmm. Another comment came in from the last UK owner: "As you rightly say the car was bought by the son of a wealthy Canadian businessman who intended to have the car restored in Paris before importing it to Canada. What may assist you is that the car was collected by an English guy who had a one man firm transporting classic cars but also specialised in supplying classic cars to the tv and film industry. There cannot be many of these guys around and if he can be traced maybe he can identify the resto company in Paris he delivered it too. Good luck and looking forward to your next book." Thanks for that! 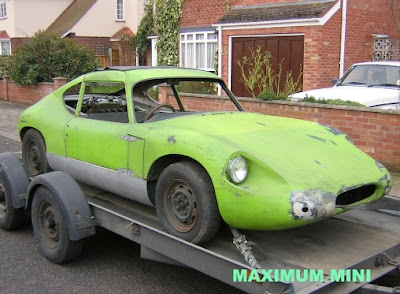 The Lawther GT in the UK in 2004, just before it was shipped to Canada
Picture courtesy Chris Gittins