With not one but two Status 365 project cars (both in signature cheddar yellow as they should be) sold recently on eBay there appears to be a bit of a rise in the interest for this wedgy Mini derivative, for as far as that is possible. It reminded me of a picture that was sent to over here some time ago. It depicts one of the 38 built 365s in full rally trim, or so it seems. I have no other trace of 'BUT 18B' but according to the source (Cars and Car Conversions magazine) it was driven by a Peter Banham in 1976. Cool isn't it? Now, why not replicate one of those project cars to a similar rally specification, put some helmets on and enter it in the 2012 historic rally season? I'm pretty sure it would become a hit. It would here! 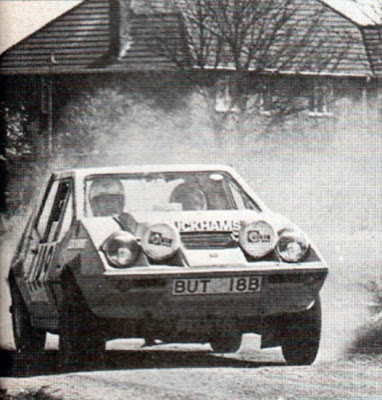 An unlikely contender it may have been, but Status 365 was rallied
Picture: thanks to Roald Rakers. Source CCC magazine

Email ThisBlogThis!Share to TwitterShare to FacebookShare to Pinterest
Labels: Status 365