Big thanks again to Graeme Farr who dug up all the information he could on the Mystery Mini derivative #4. The car was built and raced by panel beater Robin Officer from Invercargill, NZ who later came to work for McLaren in the UK. Graeme sent me a scan of an old article in a 1973 mag that interviewed Officer, and it reports:

"He picked up what was left of a Riley Elf that had rolled itself into the wall with some help from the driver we'd suppose. This he got for the bargain price of nothing (...) Robin had big plans for the Elf. It was to be the lightest thing that Invercargill had ever seen, and the sleekest. The 1098cc motor was given to Bryan Taylor to prepare and Robin chopped into the body with a real vengeance (...) When it was finished it just had to be the most radical racing saloon of all time. In truth it bore very little resemblance to a saloon. More of a pretty, low, little GT car. The roof was lowered and it had a fast-back. The roof was hand beaten alloy. The front was 'fast' and also beaten from alloy. The whole car was completely altered. In fact it was so low that the carburettor was at eye level and the driver sat flat on the floor!"

Officer caused a major sensation at the Teretonga race track and made 14.9 seconds on the standing quarter and 110.97 mph at the straight. However, when the NZ racing assocation decided that standard body profiles were a must soon after Officer's car hit the tracks, the Elf Sprint was canned for the next season. The engine was transferred to a Mini Clubman with a limited slip diff that he sold in 1973. 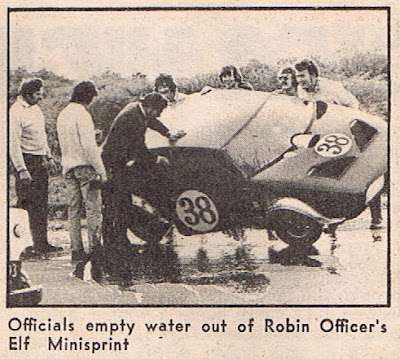 So where is the car now? Graeme found out too: "I Spoke to the supposed owner of the Elf – John Guthrie from a tiny place called Ohai. He said he hasn’t seen it for 6-7 years and he was just storing it for his friend Wayne McDougal who died. Wayne's son has it now. They put a new floor in it and did some other work.  Wayne got it when Robin Officer's dad said if someone didn’t come and pick it up it was going to the dump. It was indeed sitting under a tree. Still in its orig purpley-blue paint and a reddy-orange roof – still had the pattern on the side. John said it is complete apart from two of the alloy flares – and the bonnet was badly bogged up by a previous repairer. The shell lived in Johns rafters in his shed for quite a few years. It was very light and very low. Robin had lightened everything – even the pedals are all drilled with holes. It has Elf tailamps – which isn’t obvious from the photos."

And what happened to Robin Officer? Apparantly he emigrated once again, this time to sunny California. There he built a couple of replica Ferrari sports car bodies before he got a job with talk show host Jay Leno, doing restorations on his collector's cars. At one stage Robin got ill with cancer and apparantly Leno assisted with finance to help nurse Officer back to a good health, so don't say unkind things about Jay Leno! The next step is to get in touch with Robin now... 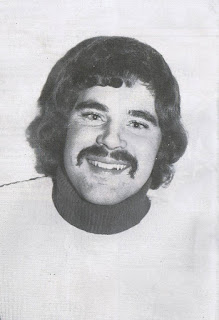 UPDATE 7 February 2011: Graeme just brought in the latest on Officer and his Riley Elf Sprint: "I found Robin's number in LA and gave him a ring. He had just been watching the superbowl and was well drunk! Very nice guy though – and still annoyed his Dad gave way the car – apparently it was just a casual comment to Wayne McDougal that he could have it as it had sheep living it! Wayne’s widow has the car – and the kids won’t let her sell it. Robin has no photos of it – well I think he said that!"
Geplaatst door Maximum Mini op 08:55