Remember this post?
As I wrote back then the Mini based Mobi-One car was said to be owned by a mister Mike Wilsdon in the 1990's, and  now I have come across a great article about the man and his wacky collection of things motoring. It was written in 1987 by Giles Chapman for Classic and Sports Car magazine, and the Mobi-One is mentioned in the article too. But look at the main picture in the article below. Mister Wilsdon appeared to be the lucky owner of a rare Status Minipower too, one of 20 made and one of only 8 with the original body that ex-Lotus designer Brian Luff built back in the early 1970's. This one in Granny Smith Green. Wowie.
I have asked Giles if he knows of Wilsdon's current whereabouts but unfortunately he does not. He remembers Wilsdon had to give up his building in Kew at the last time he was in touch with him, which was around 1998. So what happened to Mike Wilsdon and his cool collection of cars after that period? Somebody will know. 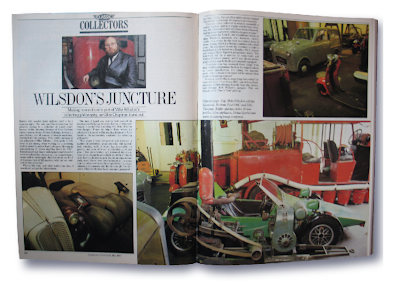