Stimson Mini Bug owner and great Mini derivatives enthusiast Paul Wylde sent in a scan of the Mini Magazine article that features the Mystery Mini based buggy, or Baya/BMC hybrid as the author of the piece appropriately calls it. He writes:

"This bright orange is one of only two made by a Devon based businessman. He realised that in overseas markets such as Greece and Malta there was a huge demand for beach vehicles, particularly the VW variant, but parts for the cars were expensive. Minis however, were still plentiful and very cheap, so he resolved to produce a buggy based on Mini mechanicals, which he could sell then as kits. Brilliant idea. Soon he had a mould, with the main tub ofthe shell based on the GP variant ofthe VW bug and the front adapted to accept the A-series. A spaceframe was designed with bars running around the front and back of the car to accept the Mini's front and rear sub frames, which bolt straight on. Simple eh?

Then it all went horribly wrong. The recession hit big time and interest in the project from overseas buyers faltered, hence only the two made. Apparantly, the other example still survives in the hands of the businessman's son."
Well, that was back in 1997 when the article was published. The car must have a new owner by now. 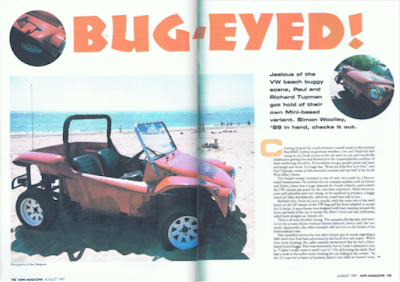