Why is it that so many creatures in Mini Moke style are named after animals? There is the Moke in the first place, but apart from that there is the Cub, the Yak, the Mule, the Bug, the Gecko and the Mongrel (still an unsolved mystery on its own - do have a look by clicking here, thank you).
But how about the Beaver? Really, that appears to be another mock-Moke. I'd never heard of it until Roald Rakers of The Netherlands sent in an old advertisement with a car that is apparantly one. I quite like its shape. But who built it? Where? Why? And in what quantity? 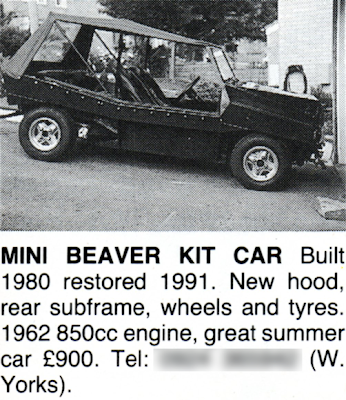 Hat tip to Roald Rakers. Keep them coming!
UPDATE 1 March 2011:
Thanks to a reaction on this blog I have now been in touch with the man who built the Mini Beaver. In fact, he built seven of them! More information will follow.
Geplaatst door Maximum Mini op 12:40