I have lost count how many articles I spent on Mike Wilsdon and his Status Minipowers meanwhile (click the Status Minipower label at the very bottom of this article to find out). But that doesn't matter really as another puzzle part of the Minipower story fell into place when Stuart Hards contacted me. Stuart wrote: "It's strange but I haven't thought about my Status Minipower (or the other kit cars I owned back in the 80's & early 90's) for probably 15 years. But I was looking through my bookcase a few weeks ago and just happened to look at the book 'Amazing Mini' by Peter Filby. After seeing the Status in there again, I thought I wonder if I google it what would come up? So that was how I came across a few web-sites with pictures of the Status on and in particular my old car YVF 904L."

"I owned this car from late 1982 until August '84. This is all from memory as I didn't keep written records from then, just a load of photos. I live near Norwich, Norfolk and bought it from a local guy who lived between Norwich & Great Yarmouth. I was just 17 at the time, probably too young to really appreciate this car properly! When I bought it, it had a private number plate on: YCL 2. This stayed on the car for a month or so until the guy could transfer it. So I know that the photos that I have seen on the internet of YVF 904L were after I owned it (it's also the car that was featured in Maximum Mini - JB). Anyway, I drove the car for the summer of '83, going to most of the kit car shows of the time. It was whilst at Hindhead kitcar show that I met Mike Wilsdon. We chatted and he told me he had another one (I'm guessing its the green one) and if I ever wanted to sell mine, he'd be interested in buying it. At the time I didn't want to sell, but kept his number anyway. It was either late '83 or early '84 when the car was involved in an accident with a tractor. It pulled out of a field and didn't see me (probably being so low, i was hidden behind the hedge, he claimed!). The front of the Status sustained some damage, mainly to the fibreglass front. Nothing too serious! Being only 18 and short of money, I needed another more practical car. And so thats how I came to call Mike and do a deal with him to buy the car as it was, with the damage (although still drivable). We arranged a collection date to coincide with the Hindhead '84 show. I traveled down with the car and we went to the show. It is probably the only car I've owned that I regret selling, and I have owned a lot of cars over the years!"

"As for driving it, well it had a right hand gear change. A sort of sliding one, with the gears back to front eg. first gear was where 4th normally was. This didn't bother me, even when swapping between cars with a normal gear change. Handbrake was also on the right. It was fitted with an Austin 1100cc engine but was pretty quick due to the lack of weight. Handling was very good, ride was a bit harsh! Don't know how it would cope with all the speed humps we have now, as it was quite low! I've dug out all the photo's from my loft, but they're all on 35mm film & in albums. I need to scan & put them on the computer. This may take some time as I have a lot of albums! I also owned a Mini Marcos, GP beach buggy, GTM Coupe, Dune buggy and others, so there's a lot of pics in total. Hope this is of some interest to you." You bet it is Stuart! Thanks very much for all this! The last owner I managed to track down was Chris McMahon, but I am not sure if he still has it and cannot reach him anymore. Who may know where it is now? Stuart would love to find out.
UPDATE 16 December 2020: The car survives. More here. 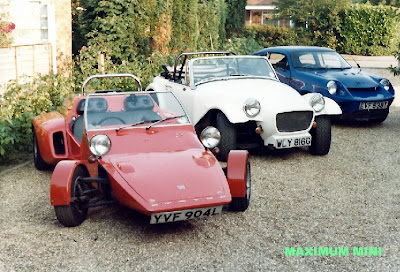 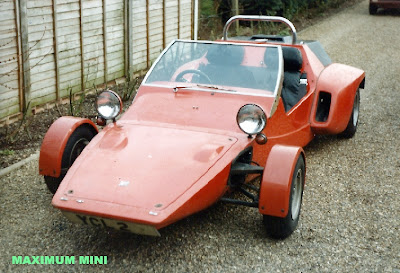 'YCL 2' registration was on the car when bought, but was soon to be changed to YVF 904L
Picture courtesy Stuart Hards 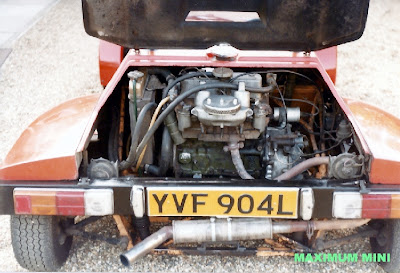