Now here's one Mini derivative that has been haunting me for a long time. Not in the last place because it is Dutch, like myself. I first learned about it when reading Jan Lammerse's excellent book 'Autodesign in Nederland' about Dutch cars and full of obscure stuff. According to Lammerse this one was built by one 'H.E. Nieuwenhuis' and raced at Zandvoort in 1968. I found out the 'H' stood for Henk Nieuwenhuis who raced the boxy Mini based special at only two ocasions: in April and in August of 1968. I also found that, after his special, Henk Nieuwenhuis raced a Lotus 23 for a team named 'Van der Herberg Racing'. The Mini engine of his special is said to have been a 1293cc and placed at the rear. In Lammerse's book there only one sketchy picture of the car in a dark colour. 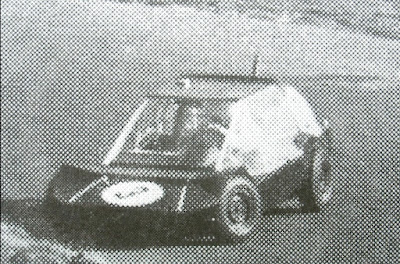 Imagine my surprise when flicking through old magazines last weekend only to find a picture with the Nieuwenhuis Special in the background. The car now came in a much lighter shade and despite the picture being not very clear, its gullwing door can clearly be seen. It was involved in an accident at the start of a race - and yes, this was the April race I found out about earlier. Race number 13 fitted the bill, too, so it can only be one and the same car, I would say. On the same picture a Mini Marcos that was involved in the accident, too, can also be seen. In fact this is the ART (Algemeen Racing Team) car (this one) that I photographed recently (now in blue, see here). With the Mini Marcos tracked down, the Nieuwenhuis Special is the next one to go now. Who knows if it survived? Dutchmen, come in! 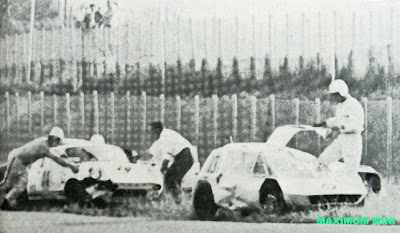 It was involvoled in a crash in April 1968. Note gullwing door and ART Mini Marcos!
Picture courtesy Autovisie magazine

UPDATE 24 January 2019: Henk Nieuwenhuis tracked down on the isle of Crete and interviewed for Maximum Mini 3. More images of the car can now be seen here.