At first I believed there were only two Mini Mares, built by Carrozzeria ORO but I soon learnt that three were built. Then came along number 4 all the way in the USA. Not much later followed by number 5 - as believed in sunny Portofino. Now, guess what kind of car was just seen on the Auto e Moto d'Epoca show in Padua, Italy? Yep. A Mini Mare. Another! Richard Heseltine, enthusiastic as ever, spotted it at the show and sent over the picture below. He wrote: "I thought you might be amused by the attached. I saw it at the Auto e Moto d'Epoca show in Padua (Padova) at the end of October. I'm afraid I don't have any info to go with it. The car was on display alongside a Ghia beach car and a Viotti-bodied Fiat 600." The car looks pretty similar to the one of John Stanmeyer, including the ship's wheel on its bonnet. I asked John if he'd hastily restored his and shipped it over to Italy, but he hadn't: "Can't be mine… our Mini Mare is sitting 10 meters away from me here in the barn!" So who knows more about this one? 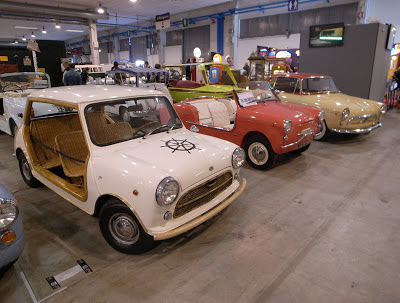 An Innocenti Mini Mare on display in Padova. It looks to be the sixth car known now
Picture courtesy Richard Heseltine