Build your own Broadspeed GT (or buy an ex-works car)

Over to the 'Ads from the past' category, from a time in which some desirable Mini derivatives were very affordable but no one seemed to want them! It looks like Broadspeed Engineering was all at a sudden fed up with their Mini based GT. We're talking 1968 1966 here. Yes, Ralph Broad just signed a deal with Ford, had BMC pissed off and had to move from his Birmingham works premises as a new ring road was laid out there. And so he sold the remaining GT roofs as kits for the enthusiastic DIYer for 299 GBP. Not bad. But perhaps the ad that appeared one month later was even more tempting. Broadspeed than also offered the demonstrator as well as the GTS racer for 950 and 999 GBP respectively. For some cool footage of the racer and Broad himself, click here - and here to see where it finally went. 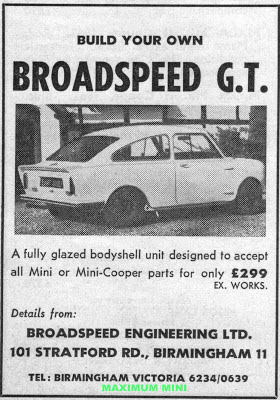 Now who ever said the Broadspeed GT was never available as a kit?
Thanks to Pete Flanagan 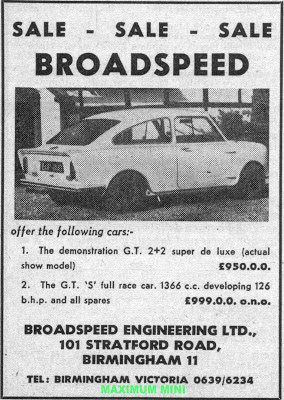 Bargain sale: ex-works Broadspeed GTs for 950 and 999 GBP o.n.o.
Thanks to Pete Flanagan