Okay, this is a special one, thanks to Marco Santos of Portugal. Marco wrote to me as he knew more about another Mystery Mini derivative posted here over two years ago (this one). In fact that was the very first mystery motor on my blog. Anyway: it was called 'Gnat' and that was about all I knew. Marco wrote: "This car is the 1973-1975 Gnat Sports 1000, manufactured in England in the Midlands, it was a wedge shaped buggy type of car or a convertible car, depending on the style, with Mini A-series 998cc engine. Made for a while by a maker called Gnat Cars. About 3 were made in the 1970s." Actually I wasn't too sure about that all, but Marco turned out to be right about such a car existing. Or having existed. I'd never heard of it, but did find a vague picture of the thing, with the extra information that it was built by 'Midland Motor Panels'. So there we go. This, too, is a Mini based Gnat. But then it remains mostly shrouded in mystery. So who knows more about this groovy roadster? 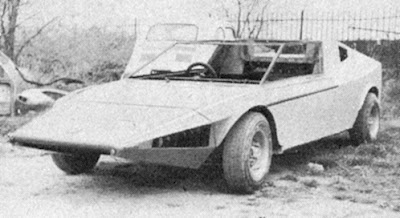 Now that is a wedge shape! This Mini based sports roadster was also named Gnat
Picture courtesy autopuzzles.com