I love a good story. And if it has something Mini based sqeezed in, I'll love it even more. So when Geoff Cartridge emailed me some time ago he made my day. Geoff's story was not just about one very rare (of 5 made) Australian built Mini Coupes, known as Ecurie de Dez 2+2 (more here) - it also seemed to have all the ingredients for a witty Tom Sharpe novel.

Here's what he wrote: "The late Jack Kaines who was co-founder of the Birdwood Mill Museum, now the National Motor Museum, had an Ecurie de Dez for maybe a year. It was of course British Racing Green, which went with Jack's pretensions to Being British. Jack's car had an insignia painted on both front doors, the crest of the Proctor family who he apparently was related to. Jack was, he claimed, a former Spitfire pilot for the RAF or RAAF. He was a very large man when he was in his late 60's and he probably weighed close to 18 stone (250lbs). He had a round florid face, glasses and an outrageous handlebar moustache. Whisky and blonde floozies seemed to be his companions when his 'grandmother' was not looking. He and his wife would drive from their home in Aldgate a place called "RottingDean" to Birdwood and when they stopped the car would rise markedly as he and his 'grandmother', as he used to call her, got out. I cannot be sure what happened finally to the car. It was a treasure from its magnesium alloy wheels to its lights and interior. One thing is for sure, Jack wrecked the underside of the car when he went too fast and drove into a creek bed."

Meanwhile, I have tried to get in touch again with Geoff, but unfortunately to no avail. I'll keep trying, but perhaps there's somebody else out here, reading this, and able to throw a light on mister Jack Kaines and his rare Ecurie de Dez 'Mini Coupe'? I'm surely not the only one liking a good story? 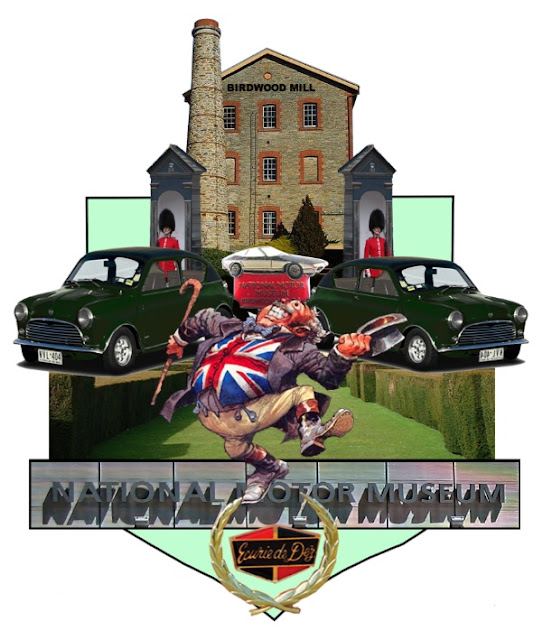 A place called RottingDean, an eccentric Anglophile Down Under and a lost Ecurie de Dez in BRG... all classic ingredients for a good read, if you ask me.
Illustration: Jeroen Booij
Geplaatst door Maximum Mini op 11:44