Le Mans' 24 hour race may seem far away, but avid Unipower fan Gerry Hulford kicks off the new season with lots more background information about Unipower's Le Mans entry of 1969, after having read this article. He wrote: "Hi Jeroen, Having read your blog, I thought I'd just clarify a point or two. The car that went to the test day at Le Mans in March 1969 was car number 53 and is the car I own. The car that went to qualify before the race in June 1969 was number 47 and was a lightweight version hence the different race number as this was a different chassis number. The car had a very thin fibreglass body strengthened by carbonfibre strands laid across the fibreglass (I saw it with Piers Forester when I visited the Works in May of 1969). Carbonfibre cloth was not available in those days as this was a very new material. The car had the large headlight fitted in the front as they had found the standard lights lacking in the March test. You will see this in the photo of the car being fuelled by works manager Nick Ouroussoff (6th picture in article mentioned above here). The car failed to qualify due to Stanley Robertson not being fast enough, much to the annoyance of Piers Forester. This car then went on to race at 16th Gran Premio Mugello on the 27th July 1969 with race number 35 finishing 46th having qualified 41st. You will see in the photo I sent you that the hole for the additional headlight has been repaired as it was not needed."

"The Le Mans race deal with Stanley Robertson was that he would also buy the car, so the car then was raced afterwards at the Nurburgring 500 kms on the 7th September 1969 by Stanley Robertson finishing 9th in Class, still running the 1293cc Cooper 'S' engine. On the 17th May 1970 Stanley Robertson went to Spa where he and John Blanckley qualified 35th but failed to finish. On the 31st May 1970 Stanley and John went to the Nurburgring 1000kms where they qualified 54th and finished 32nd still with the 1293cc engine. Shortly after this Stanley fitted a 1600cc Ford FVA engine and on the 19th July 1970 ran at the Grand Prix Mugello but failed to finish due to gearbox failure. On the 18th September 1970 Stanley ran the car with the Ford FVA in the Nurburgring Sports, Prototypes and Can-Am race where the car was badly crashed, writing-off the chassis. The engine and what parts could be salvaged were removed and the rest disposed of at the circuit. The engine then found its way into a SAR, which Stanley raced at Croft in the UK and then the Nurburgring 500kms on the 5th August 1971 where he and John finished 2nd."

"So the actual Le Mans qualifying car is no more. The car in Belgium for sale by Automobiles Vanderveken as the 'Le Mans' car is in fact the 'Janspeed' car (see here and here for the ad) that never went near Le Mans and to my knowledge only ever raced in the UK. I have spoken to the proprietor of Automobile Vanderveken, however he still likes to believe the 'provenance' with which he bought the car... I hope the aforementioned provides some clarity as to a small part of the Unipower story. Many thanks again for giving the Unipower the publicity that you have. Kind regards, Gerry"
That's much appreciated, so thank you Gerry! Meanwhile, Nick Garris sent in another two great pictures of both 'Le Mans Unipowers' taken during testing and qualifying in '69, see below and thanks to you, too! 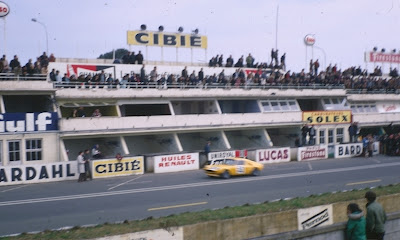 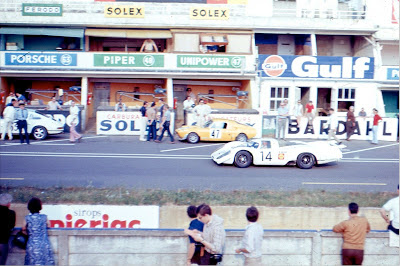 Le Mans qualifying, June 1969. A different Unipower works car (nr. 47) on just about the same spot
It never made it to the 24-hour race and was written off on 18 September 1970 wearing a Ford engine
Picture via Nick Garris