Another mysterious Mini based car came to the light while searching for something completely different, last weekend. And it's an intriguing one. Clearly based on an early Mini, perhaps even a 1958 prototype, or an early Van, it's quite heavily modified. The rear is much rounded off, the doors have been cut, the handles lowered, and with what seems to be a Sprite windscreen fitted on the front scuttle must have been altered, too. Interestingly, it was trialed as early as in 1961, by which time the earliest Mini derivative (Butterfield Musketeer - the Deep Sanderson 301 prototype was under construction) hadn't even been made public.
There is some more information from the magazine (Autosport) in which I found the snippet. The car is called Odnik and was trialed by a man named Jack O'Donoghue who won his class during a Hewison Trophy qualifying trial on 16 December 1961 - supposedly the second trial O'Donoghue tackled with his Mini special. I believe the registration number 'CZA 333' to be Irish but am sure somebody over here will be able to confirm that. 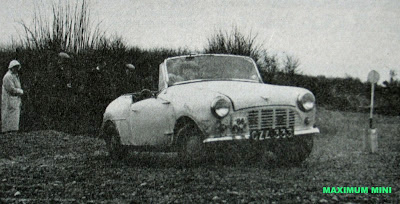