I love this shot of the Deep Sanderson 105 'Twinni' in action. It's from the April 1964 issue of Sportscar magazine which covered that year's racing season start at Mallory Park on March 8. The image was sent in by Status Minipower owner and enthusiast Andy Downs and the original caption reads: "Chris Lawrence had to work twice as hard as anyone else on the grid - he had two engines to start! He was kept pretty busy at the wheel, too, when the Deep Sanderson came to the twisty bits. Brave chap!" Brave indeed. The actual car is still for sale, see the ad on these pages here. 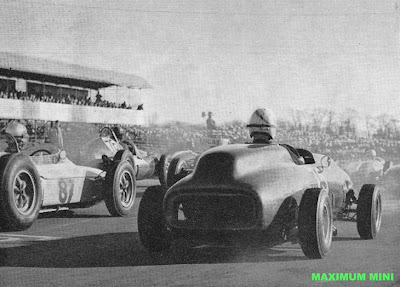