Good news for fans of period accesories, now that JA Pearce Engineering is given a new lease of life by enthusiast Roger Butt. Roger decided to put the famous JAP Magna wheel back in production and the first new alloy and magnesium wheels have by now been cast. The reason for posting it here is not just because quite a few Mini based cars were fitted with JAP Magna wheels in their heyday - there is a strong link to the Deep Sanderson marque, too, as John Pearce originally was sub contracted by Christopher Lawrence to build the Deep Sanderson 301s. And he must have been quite a charachter, living in a caravan with his dogs, which supposedly frightened everybody off. Richard Heseltine wrote to me a while ago: "Chris Lawrence told me a great story about JA Pearce who was contracted to make the kits; something to do with him being a getaway driver for a notorious East London villain. He was also arrested many years later for smuggling rare birds' eggs!"

Anyway: this man originally developed the Magna wheel for dragsters and racing cars – often in outrageous widths. And by the mid-1960s, the word had spread and demand for a roadgoing equivalent prompted the company to launch the Magna road wheel at the ’64 Racing Car Show. The wheels were available in 10in to 15in diameters, and 5in to 10in widths, for both bolt-on and centre-lock fittings. The centre-lock version often used a signature three-eared knock-off spinner, like on some of the Wood & Pickett Minis. In addition to the wheels, Roger now plans to reintroduce some of JAP Engineering's other products, too, including racing mirrors and steering wheels. See his website here for more information. 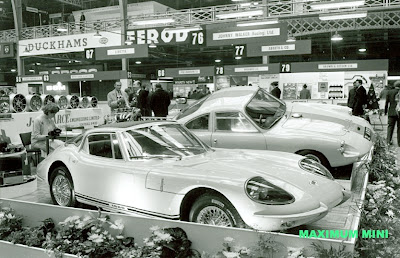 This photograph shows JA Pearce Engineering's stand at the Racing Car Show of - I think - 1967. Note Magna wheels at the back plus Deep Sanderson 301 behind big Marcos (click up for bigger)
Picture courtesy Guy Loveridge 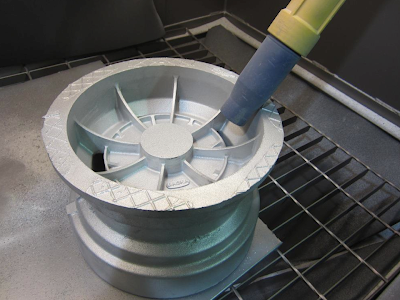