Where is Dagobert's Cox?

The first picture below is an all-time favourite. It shows Swedish racer Dagobert Swensson in his Cox GTM at the Bengtsfors Ring, also known as Dalslands Ring, in Sweden as early as March 1967. And I am not the only one liking it. Reader Peter Camping, enthusiastic as ever, wrote: "Personally I think this is one great image indeed. The tiny little Cox with number 4, the much bigger Ferrari 750 Monza of Björn Bellander with number 5 and in between them Elwa-Buick (not Elva - no typo!) of Jan Bellander with number 49". That makes it not the only Cox racing a Ferrari, see another one here!

But meanwhile, another two pictures taken at the same start grid from different angles have turned up. Peter came up with the colour one, showing only a corner of the Cox - yellow in colour as it seems. And with it some more information from the Ferrari's driver. Translated from Swedish it said: "Once we drove a SSF-race at the Bengtsfors Ring. It was a wonderful day and the sun was shining. Jan's new car Elwa Buick had already showed up at Skarpnäck and had drived away from everybody. The resistance was my Ferrari, Dagobert Swensson in Cox Mini and some Lotus Sevens. The race went this way. I took the start mostly due to that the Elwa was high geared in it's Porsche gearbox. I gave what I could in my Monza but realized soon that he could easily follow me. After the curve before start he drove me over as easy as nothing. It's a hard feeling to realize. It's like to be pushed down and having no strength left to make resist. The other cars first Janne Agrén were way behind." Now that's what I call atmosphere. I'm sure there's plenty more information about the Elwa-Buick special and much modded Ferrari to be found. But how about Dagobert's Cox? 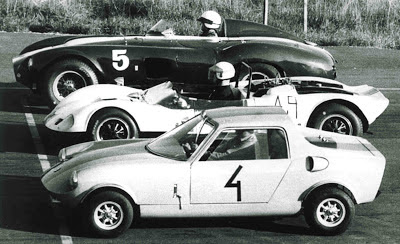 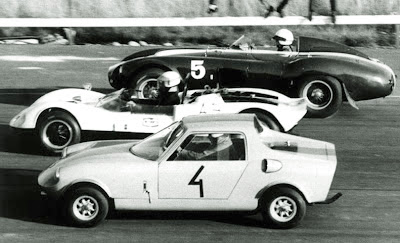 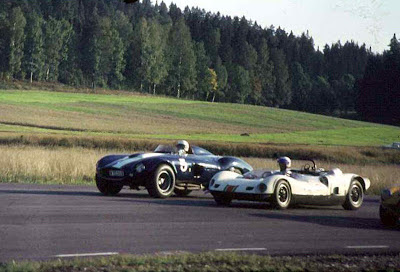 Colour picture only shows a tiny bit of the Cox GTM - it's yellow, or so it seems
Picture courtesy Björn Bellander