Yes, this is the update on the Le Mans Mini Marcos project that I promised last week. There is news, and it's good news, too. Some of it focusing on the car's past, as I am continuing to research its history and keep on finding snippets of information. But there's news from the present day, too, as work on the body is now finally under way, and looking very promising thanks to a superb craftsman! In three points:

1.
I have recently found some beautiful Kodachrome slides showing the car at Le Mans, which are a great attribution to the ever-growing file and will be very useful for the book that I have in mind. Thanks everyone for thinking of me, not in the last place Christophe Pund, Karsten Stelk and Gérard Boulin.

2.
I also received the message that I'd been hoping for for such a long time, unveiling more about the mysterious past of the car. I was told the car probably went to Africa, only to come to Portugal in the early 2000s. What happened between 1975 (when it was stolen in Paris) and 2016 (when I bought it) was totally shrouded in mystery. So was there an Africa connection? I asked around everywhere and published a six-page article about the car in Classic Car Africa magazine, asking for more information. It all lead to nothing. But then a Portugese model maker phoned me up one evening about two weeks ago, clearing things up. He saw the car in 1993 in Coimbra, recognized it as the Le Mans car and tried to buy it, but didn't succeed. He then found it with a new owner and tried to buy it again, which again didn't work out well. But he gave me a name and I made further investigations. The picture below turned up eventually, shot in 1993 or 1994 with the car on its back (ouch!) in a Portugese workshop. It was in an almost similar condition then as it was when I bought it. I'm still investigating but know a lot more now (for the book!) and can now say that there was never a thing such as an Africa connection. Thank you very much Carlos and José.

3.
Last but certainly not least, repair work on the car's body has now finally started and it is looking very good. The much-butchered battery box is now almost re-made and it turned out to be a bit of a puzzle. Off all the bits cut out, there was just one piece of fibreglass left, with some holes in it. But it formed the answer to how the battery was placed into the car. Initially we thought it was east-west, but it turned out to be longitudinal in the end as it would have conflicted with the rear subframe. The holes fit in with straps to secure the battery. The front is also under heavy repair now, with two more separated bits being re-used and fitting in perfectly. The six holes to attach the front radiator (click here for more) are all visible once again! Many more smaller cracks and holes that shouldn't be there have been closed beautifully by now with more to follow. I went over to have a look and deliver the petrol tank and front screen in order to make the body ready for these. I'll let you know what's next. 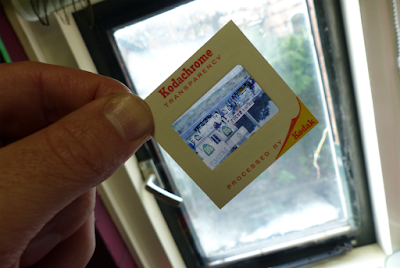 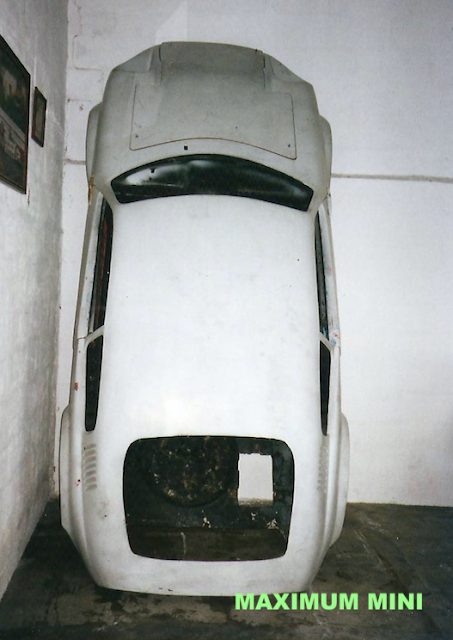 This picture was taken in Portugal in 1993 or 1994. History-wise it's very valuable to me!
Picture Jeroen Booij archive 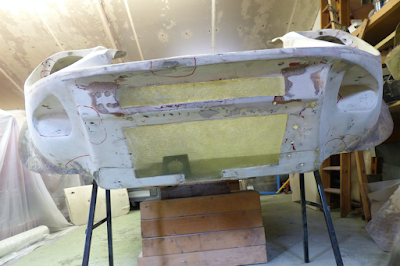 Front side is now being repaired back to like it was. Bottom pieces have been puzzled back in
Picture Jeroen Booij 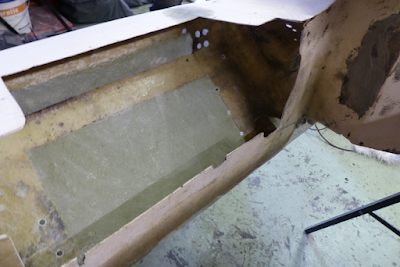 This is the front from the inside. Note the original three holes on each side to attach the front radiator
Picture Jeroen Booij 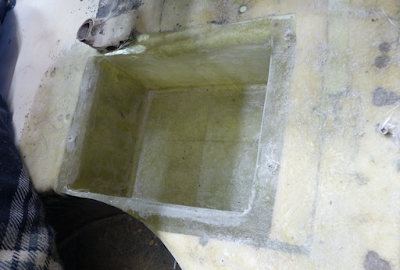 Battery box being refabricated. You can spot the old bit that was cut out and is now laminated back in
Picture Jeroen Booij