When a Porsche designer retires...

It's surprising how many great names in the world of automotive design have been involved in Mini based cars. ex-Lotus men such as Brian Luff, Paul Haussauer, John Frayling and Arthur Birchall. But also Gordon Murray and Frank Costin, who'd been a De Haviland aircraft designer before he started working on racing and sports cars. And even Alex Tremulis, who'd been a senior designer for Duesenberg, Ford, Tucker, Cord and Chrysler in the US before coming up with the wacky Mini-powered Gyro-X.

Stranger, still, was the Graham Hull Special, designed and built by the ex-Rolls-Royce and Bentley chief stylist of the same name, who'd been responsible for cars such as the Silver Spirit and the beautiful 1990s Bentley Continental. The Special he built upon retirement (see Maximum Mini 3) missed all that style and glamour. But then this was a vehicle he'd made purely for himself.

Could that be beaten? Perhaps it could, as in Wolverhampton a Mini based 3-wheeler is now offered for sale with a grand claim. It was allegedly "built in the 80’s by a retired Porsche engineer who couldn’t afford an early Morgan three wheeler." Wow! The trike is known as ‘The Moose’ and was built around a 1964 Mini, retaining its front subframe unmodified, while the rear one was cut, strengthened and repositioned with the one rear wheel in the centre rear. They are both bolted onto a three-quarter inch tubular steel space frame construction that was clad with an aluminium body. It was registered in September 1987 and is now seen for sale here. Something for you..? 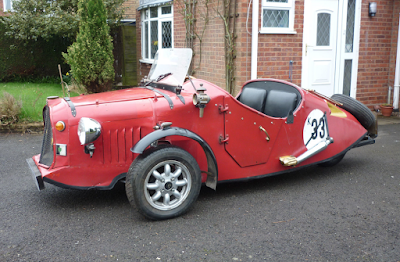 'The Moose': said to have been built by a retired Porsche designer. We'd love to learn more about that!
Picture ebay.co.uk 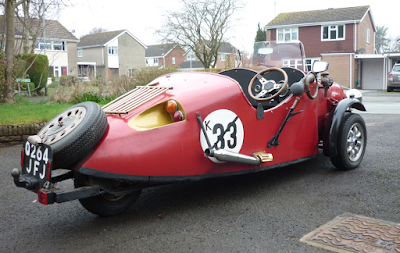 Can you find any reference to any classic Porsche models here? We can't
Picture ebay.co.uk 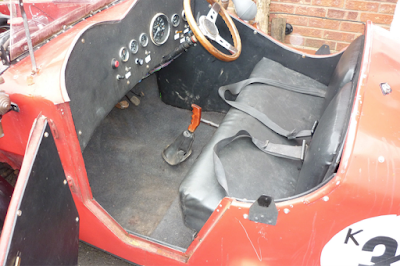 Hang on, early Porsche 356s have a bench seat, too! Anyway, 'The Moose' is for sale
Picture ebay.co.uk

Email ThisBlogThis!Share to TwitterShare to FacebookShare to Pinterest
Labels: Three-wheelers