The time is certainly right for ice cream vans right now. And the good news is that Whitby Morrison's, who have been creating ice cream vans since 1962 and Mini based ones just a few years later, have come up with a brand new example, built on request. This is what they wrote:

"You’d be hard pushed to find a more quirky and iconic Ice Cream Van model from the 70s than the Cummins Batman Mini. Unmistakable, these vans were built in their hundreds and sold all over, including abroad. The Batman Mini within the Whitby Morrison Heritage collection remains the most popular of them all and is often requested for photoshoots and suchlike."
"Its popularity has led to the production of this quite stunning replica on behalf of Unilever, completed in the famous blue and green Ben & Jerry’s cow livery. The van will soon be serving at prestigious sites across the capital so be sure to keep an eye out for it. And if you have your own Mini pickup or van, then why not consider having your own Batman model manufactured…?" 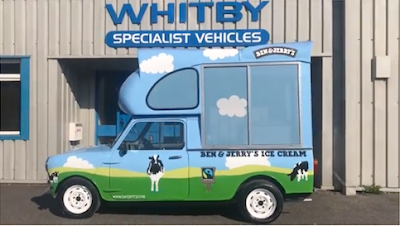 A Mini 'Batman' ice cream van in Batman livery, made today by the original builders for Ben & Jerry's Ice Cream. It is based on a 1977 pick-up but could do with some smaller wheels...
Picture courtesy Whitby Morrison