Anyone who's been to Malta in the last couple of weeks? Kees Plugboer did so in the 1990s, when he spotted this unusual converted Mini. It looks to have started life as a Van, Pick-Up or Estate. But at one stage it was disposed of its roof and doors, received a different rear end, high sills and chrome grab bars plus a full-length hood. With all these mods, it was perhaps turned into some kind of Beach Car-esque commercial? Calypso Cruises, which still appear to exist, thought it may well be used as mobile advertisement. Now, questions are: was it a one-off and does it survive..?

Here another Maltese Mini derivative, as spotted in the 1980s by Rens Biesma. 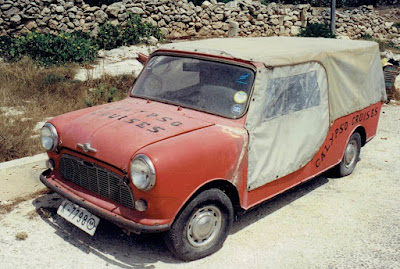 Mini commercial was turned into a 'Beach Car-esque' creature at one stage, used by Calypso Cruises
Picture Kees Plugboer 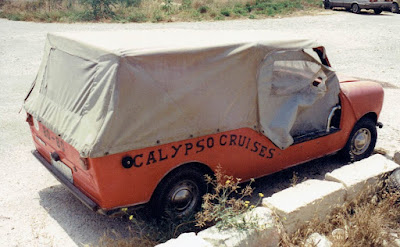 No roof or doors, different rear end, high sills and chrome grab bars. Was it a one-off?
Picture Kees Plugboer