It pays to always look around for interesting stuff, even if it is in your own hometown where you think you know all. Reader Armando Loni proved it last week, when he walked into a local garage in Ledbury, Herefordshire. He wrote: "Hi, J. I thought you'd be interested to see the attached photos of a Stimson that I came across in a local independent garage. The owner has been working on it for a couple of years and has made a number of improvements to the structure. He has also just purchased a GTM Coupe from eBay! Regards, A."

Well spotted Armando. But in fact it wasn't the only think of interest that could be found in this particular garage.I mentioned your website to the owner as well. He continued: "He's also restoring a 1968 Mini-based CanAm-type car.... Forgot the name but it begins with a 'P'. Now that's where my interest was really triggered. Naturally I wanted to know more, but Armando didn't know anything more. But he promised: "I'll go back up there tomorrow and ask if I can take some photos of it!"

In the meanwhile he did just that and you'll be surprised to see what he found. To be continued. 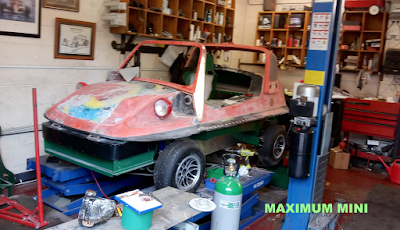 Local garage hid this Stimson Mini Bug to reader Armando Loni. And it wasn't on its own...
Picture courtesy Armando Loni 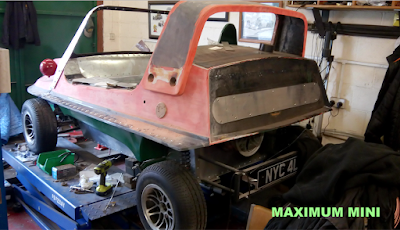 The car's owner made several improvements to the structure. And he has more interesting cars
Picture courtesy Armando Loni