The cars of Douglas Glover (3) UPDATED

Over to another DGS Firecrest, built by Douglas Glover of Dublin, Ireland in the 1960s.

The first Firecrest was described here in detail recently (click here) followed by the second car, which was used for PR activities and later raced and spectacularly crashed on a hill climb in Donegal (click here). This is number three of which unfortunately not much is known.

All I know is that 'KZE 999' is a Dublin County registration, issued somewhere between May 1963 and June 1964. The car is wearing slightly different headlights then the other two with large chrome surrounds plus spotlights. The picture below is unfortunately the only one that I have of the car.

UPDATE 24 October 2020: Eddie Fitzgerald dropped me a line as he knows more about 'KZE 999': "I have a memory of seeing it in the mid 1960s. Glover started a business a few miles from where I lived, I think the roof section may have been a one-piece moulding fitted onto the shell like a hard top. I have seen this photo before, and it is the only one I have seen of the car, which was either stolen and never found or written off in an accident with a truck. Regards Eddie." 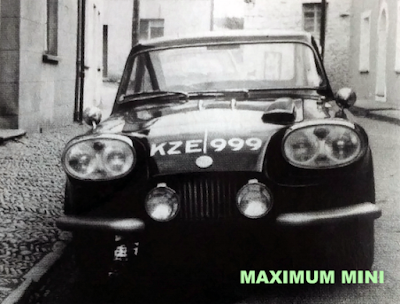