In the last few weeks I received some great messages about long-lost Mini based cars being found. The one I got from Dan Stokes ticks all the boxes of mystery and intrigue, originality and desirability.
It started with an e-mail from Dan a week ago, when he wrote: "Hello Sir, I found your most interesting article regarding the Lotus Fisher GT attached (see it here). I rescued this car today with registration 'ASG 182B' and am looking to restore it to its former glory. Would you happen to have any further pictures? Or details as I’d love to get it just as it was when raced. Also would you be interested in pictures from the restoration process?"
Of course I was interested. But knowing something about the history of the cars built by Jack Fisher of Edinburgh, Scotland, I was quite sure Dan's find was for the Fisher GT's (Lotus derived) body alone. This as I'd found out that the car had been modified into the Fisher Spyder throughout the years. How wrong I was!
I exchanged information with Dan and sent him a couple of historical images. When he dropped me another line, now adding some photographs of his find. And, boy, I was in for a grand surprise! There was no doubt that the car was still intact, up to its original space frame, body made from a Lotus Elite with Lotus 23-nose section and even its Mini engine placed at the back. Wow!
And so I took another deep breath to see what I'd missed in my earlier researches. Work on the Fisher GT was started as early as in 1959, with a very early 850 Mini engine and a Lotus Elite body shell cut in half in an accident as starting points. Jack Fisher had built a space frame picking up existing door pillars and windscreen tubing. He'd kept the Lotus Elite's boot intact, with the space frame made into that, to have the Mini engine fitted. A Lotus 23 nose was modified to fit and Sprite wheels & drum brake assembly were used to put the car on its wheels. When finished it was sprinted and hillclimbed in a number of events in Scotland and northern England, after which the engine was changed twice. First to a 1000 with an MG head, then again to a 1071 Cooper 'S'. Later a new space frame was constructed using Lotus 23 suspension, discs, wider wheels but still using the 1071 engine while a new body was also made now using Lotus 23 nose and the body centre section of the ex-Ecurie Ecosse Tojeiro. I think it must have been at this point that the original Fisher GT was not actually modified but put aside with the new car replacing it. The Fisher GT in its second guise was later modified into the Fisher Spyder, which I photographed with its then-owner Peter Speakman in 2011. Speakman had a great file of the car and had done thorough researches on it. He also believed his car was a development of the original car 'ASG 182B'. We were both wrong.
I now understand from Dan that the original GT was sold to Southampton in 1981 with it just being tucked away. It hasn't been moved in the last 30 years or so and it was there that Dan found it. There is a lot more to tell, as Dan wrote in detail the whole story of its discovery and even sent me a video of the car in his workshop. Together with more historical pictures of the car, I'll keep these for tomorrow, though, as this article would become too long. So enjoy the pictures of Dan's fantastic find for now and watch this space tomorrow for more!
UPDATE 13 October 2020. Second installment with video here. 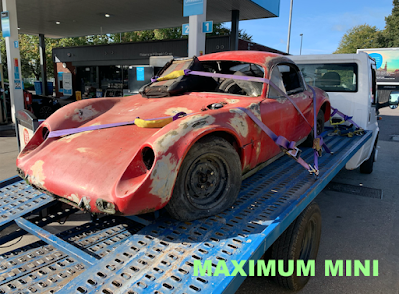 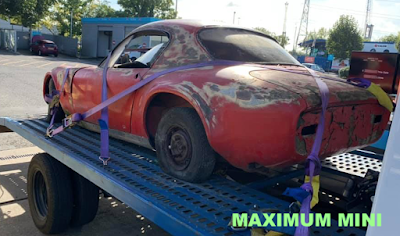 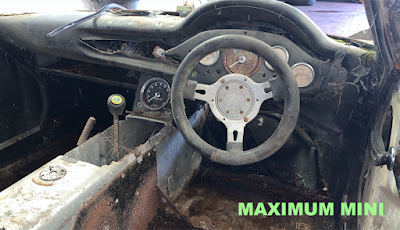 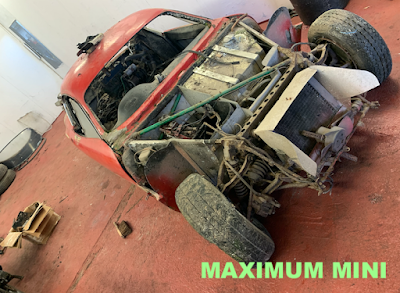 With the he Lotus 23 sourced nose off, the suspension, petrol tank and radiator are exposed
Picture Dan Stokes 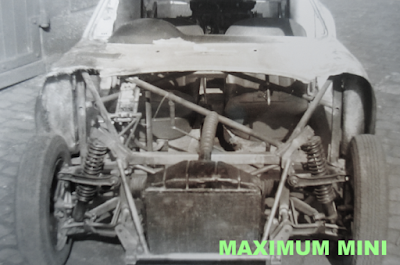 This is a photograph of the car during its built in 1963 or '64. Note that not too much has changed
Picture Jeroen Booij archive 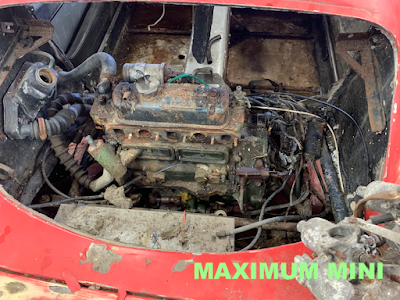 The engine in the spaceframe behind the seats. Still a Mini but I'm not sure if that's the 1071 Cooper 'S' engine it was last known to have? Anyone? (UPDATE: confirmed to be an 'S' engine-JB)
Picture Dan Stokes 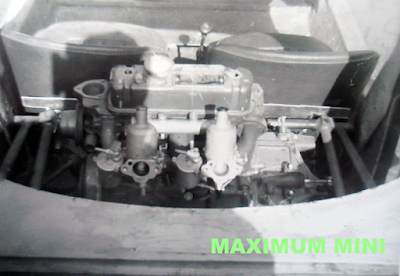 And again back in 1963-64. By that time it was still using an 850 engine, and a very early one too
Picture Jeroen Booij archive 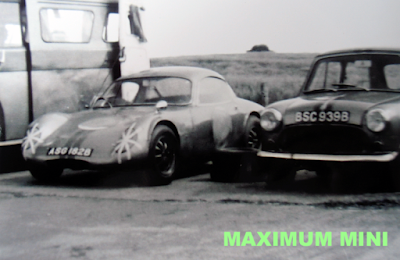 Finished and ready to race somewhere in the 1960s, it was definitely a very low car
Picture Jeroen Booij archive 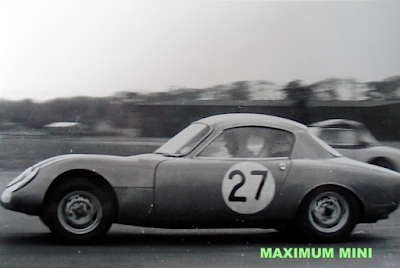 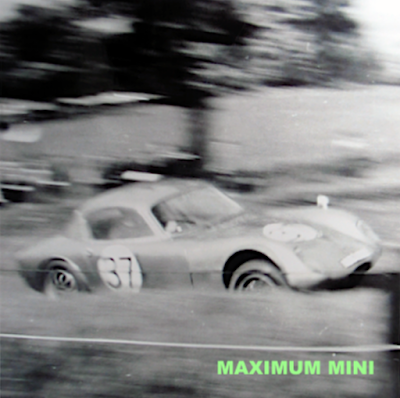 Beautiful action shot. The Fisher GT was one of the last cars I'd believed to have survived!
Picture Jeroen Booij archive
Geplaatst door Maximum Mini op 09:35