Ever-enthusiastic fellow-Biota owner Tim Harber sent me some material related to the illusive Deep Sanderson 105 'Twini' or 'Twinny'. What struck me most was a clipping from a 1972 issue of Cars & Car Conversions magazine that was new to me. It's an interview with Irishman James 'Jim' Gavin, who worked for Chris Lawrence in the mid-1960s and famously sprinted the Twini at the British International Dragfests at Church Fenton in 1964 and at Woodvale in 1965.

From the article: "Jim came to England and worked for Chris Lawrence, the Deep Sanderson man, whose brilliance and ideas and driving was wasted by accidents and financial disaster. Jim found fun in everything at LawrenceTune, but most of all in a racing TwinnyMini single seater. Jim doesn't say wether it went round corners, as he used it only for dragging. In 1964 when the first Great Britain versus America contests were held. "The car would do the 1/4 mile in 11.43 and at the end of the run would be pulling 115-118 mph. It earned me some money, and this was very handy when we started SuperSport." The car was lying around partly built, using four tubes tying the two subframes together, and the whole thing was run with 10" wheels. The two engine craze rather faded away after John Cooper had an awful smash on the Kingston bypass in a saloon twinny. The LawrenceTune car used two Downton 1071Ss, and possibly the arrival of the 1275S saved any more disasters."

What's more: Tim also sent a link to some film footage of these dragfests, in which Jim Gavin can be seen briefly in action with the Twini - see below and go to around 3:10 for the Deep Sanderson. What struck me here is that the car looks to be green. I have a few black and white pics of the Twini at the drag strip, but always thought it to be red. It was red with a black stripe when I photographed it for Maximum Mini 1, back in 2007, with absolutely no clues of any green paint on the body. 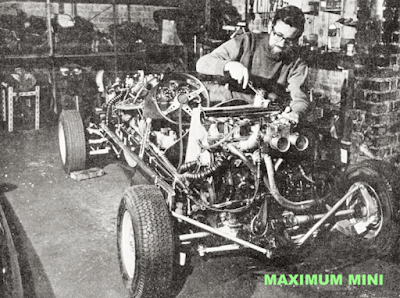 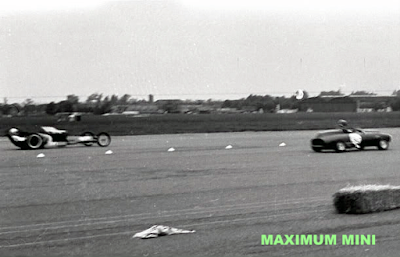 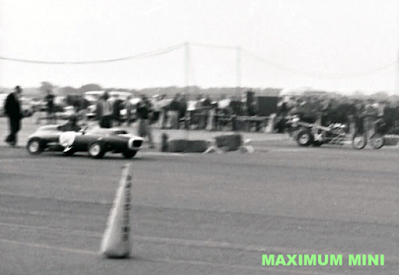 Gavin said: "It earned me some money, and this was very handy when we started SuperSport"
Picture jeroen Booij archive 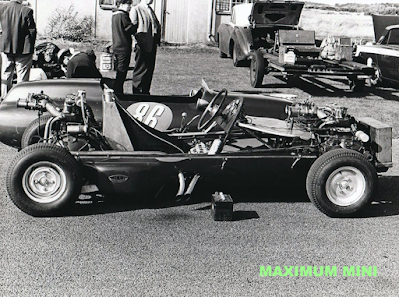 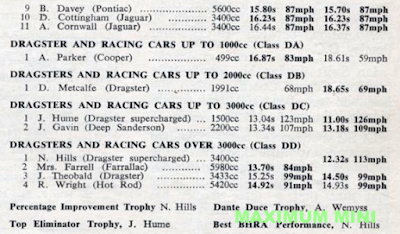 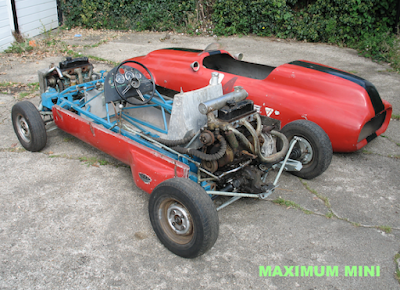 As found in 2007 - the Deep Sanderson 105 was red then, with no traces of any green paint
Picture Jeroen Booij
Unseen film footage by Nick Pettitt shows it in action on the drag strip when it was green
Video courtesy Youtube / Nick Pettitt
Geplaatst door Maximum Mini op 12:36