A while ago I got confused over a well-known Wood & Pickett publicity photograph. I always thought it showed actor Richard O'Sullivan but later learned it was Twiggy's manager Justin de Villeneuve - full story here.

Or was it? One reader threw a new light on the picture, writing it wasn't both of these men but John Paul instead: a man who was at the very heart of the London in the swinging sixties and the originator of the 'battledress' in fashion as worn by Jimi Hendrix, Bob Dylan, Mick Jagger, The Cream, The Tremeloes and of course The Beatles in their Sergeant Pepper-period.

By this time it has been confirmed that he was right! The man in that famous Wood & Pickett picture is indeed John Paul and I have been sent a picture of the man taken a month or so ago - I'm sure you'll notice the resemblance too. John appears to have had a fair share of interesting vehicles himself, and I hope to speak to him soon. 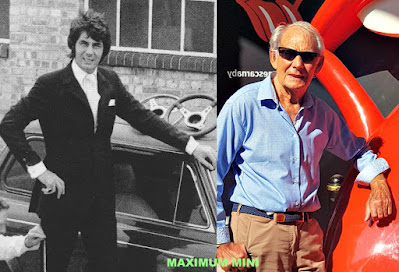 Email ThisBlogThis!Share to TwitterShare to FacebookShare to Pinterest
Labels: Celebrities, Wood and Pickett