Remember the Deep Sanderson 301 that was crashed at the Nurburgring in 1964 and then rebuilt before being turned into a Triumph Spitfire based Specials by reader Chris Tamblyn's stepfather? Well, you can read all about it here if you can't. Unfortunately Chris' pictures were pretty hazy.

But it turns out that I did see a picture of the car before, as Chris Rees had shown it in his 1993 book 'British Specialist Cars'. I contacted him and got a swift reply as always: "Very interesting research! I’ve managed to find the original picture which I attach - in colour! I think this dates from my time working at Alternative Cars magazine. All it says on the back is '1963 Deep Sanderson'. Hope this brings more illumination."

I love it! And the other Chris, that's Chris Tamblyn, was happy to see it, too: "Hi Sherlock Holmes! I still shudder with what he did to that car! That photo would have been taken outside their house in Swanage, but how it got out I don't know. If you find any more you have my full permission to use them." Well, the car registered KPP 187C is actually still known in the DVLA database as a 1965 Triumph Spitfire, so it may well survive?

Meanwhile, more interesting Deep Sanderson news is on its way as a timewarp 301 has just resurfaced in one very unlikely place. More to follow soon. 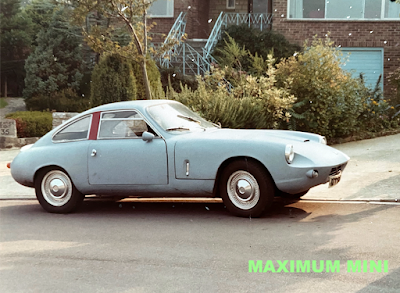