One owner since 1969: Banshee is now for sale

What do you do as a South-African youngster who's hankering for a Unipower GT? Well, back in 1969 Tertius van Zyl started building his own take on the Unipower, eventually christening his creation Banshee after 12 years of hard work. But what do you do when you're getting old and cannot climb in anymore? Well, Tertius has decided he may now sell his beloved Banshee after more than 50 years. Gary Johnson-Barker contacted me about Tertius' plans. In his own words:
"'Banshee' was born out of the need to have something to compete in the the (then) 'Sports Car' club racing class that was clearly beyond the capabilities of my well rallied and raced, mildly tuned 850 Mini in the early 1960’s. Inspired by a road report in Cars & Car Conversions of the Unipower GT, I set about 'borrowing' some ideas from that source (spot the resemblance?) and a terrific book called 'High Speed Low Cost' by Allan Staniforth - the building of a 140mph Mini based single seater. The body originated on the drawing board. A 1/10th scale model was built to check the lines and a full size egg box style frames were cut from plywood and aligned on the chassis. Chicken wire, sackcloth and 500lbs of plaster of Paris was used to shape the body over the frames. This was then moulded in fibreglass as a female mould (subsequently destroyed - damn!) and the final body panels were moulded. Paint was applied with a small electric spray using a two part 'Poly' kindly supplied by a mate at the Dulux Plant! The chassis can best be described as a monocoque/semi stressed skin. Actually this means trapping two Mini front subframes in a lattice of 1 inch square steel tubing and 'popping on a sheet of aluminium across the bottom and up the sides to form two sill pannier’s."
"Suspension is pure dry Mini with the front cones having been machined to remove the 'pot bellied' look and then drilled to resemble a Swiss cheese in order to soften the spring rate. Rear suspension started out with the Mini uprights turned upside down with the retained steering arms connected to the lower suspension arms. This arrangement caused some interesting steering moments with the back of the car inclined to want to do it’s own thing in cornering and over bumps. A visit to the then Cox GTM factory in Manchester cured my problem with the acquisition of a set of their prefabricated lower wishbones, with built in negative camber, that effectively lock the uprights in the right direction. Brakes are drums all round, twin leading in front and singles at the back. Rear backplates had the centre hole enlarged to fit over the front uprights being used. All this to accommodate the hand brake system (with racing in mind, I wasn’t going to bother with a handbrake but at this stage of construction I got engaged and the idea of racing was banned from conversations! - hence the need to convert my thoughts to a roadworthy vehicle). Hydraulics came via a 1960’s Ford Cortina dual system master cylinder and the same donor was used for the clutch. Used because Mini cylinders being upright in design, would have stuck through the bonnet! Fuel for the two 1 1/4 SU’s comes via a Mini Van tank located behind the seats - thinking of weight distribution - with cut off switch on the centre console to stop the pump doing it’s thing while working on live electrics or ignition. Cooling is taken care of from a front mounted Triumph Spitfire rad through aluminium pipes and a Renault 5 electric fan. A feathering fan was a later addition on the engine side that cured a tendency to run hot in traffic."
"The windscreen - or more correctly the wind deflector was moulded from perspex over a wooden mould. Stuck into a friendly sign maker's oven were it conveniently draped itself rather well over the mould. Imperfections were sanded out and the whole thing 'Brasso'd' back to its former self. The lump at the back started life as a standard 998cc from a scrapyard but over the years its specs have changed to 998 Cooper. 948 Cam, larger inlets with double springs, 9:1 compression and twin 11/4 SU’s with ram Stacks. The head being gasflowed and ports enlarged. Final drive remains at 3.7 but 3.44 would be better as the low weight of the car sends the revs up rather smartly and open road cruising would be kinder to the motor that is pulling in excess of 5000rpm at the legal limit. Exhaust is a tuned length to preserve back pressure, via a Cooper manifold and two straight through boxes. Gears are changed using a sawn in half early Mini remote extension, with the gear lever bit mounted backwards in the tunnel between the seats and then via a length of round steel tubing that passes under the sump to a block (courtesy Cox GTM) on the bit sticking out of the back of the motor. Gear changing works well and remains as per the normal Mini i.e. First is in the top left hand corner. Instrumentation is Smiths (revs, fuel, oil pressure, water temp & charge) with the exception of a Citroen speedo chosen for its size - underreads horribly!"
"Considering the old girl was designed over 50 years ago with construction having taken about 12 years (I was transferred around the country a lot in my airline sales job) and first being road registered in 1980 in Pinetown, she continues to provide a lot of fun for my two sons now in their 40’s who were just a twinkle in my eye when Banshee was born. I quite enjoy her company too."
Let me know when you are interested in this unique piece of South-African motoring history, and I'll bring you in touch with Gary or Tertius himself.
UPDATE 27 April 2021: The car is sold now and will remain in SA with its new owner. 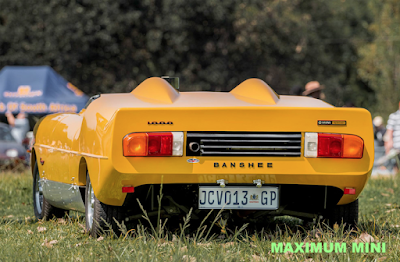 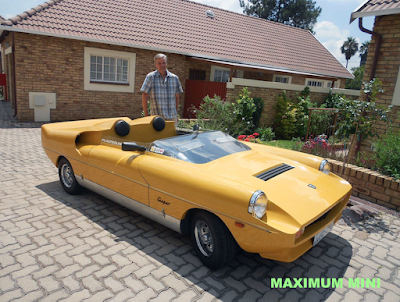 The man and his machine. Tertius always kept the car but has now decided to sell it
Picture via Gary Johnson-Barker 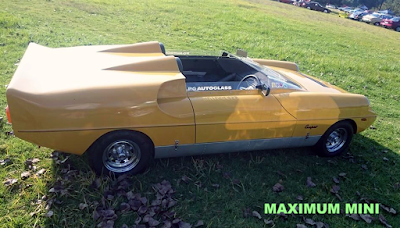 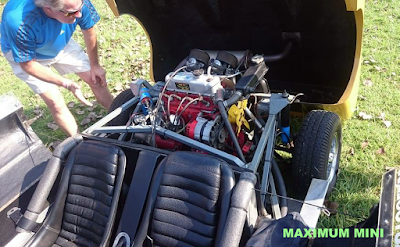 Initially the car used an 850 from a Mini Van, but now comes with 998 Cooper engine
Picture courtesy Sean Brennan 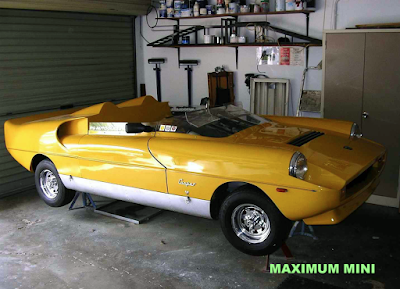 There is no doubt that this one-owner car was tenderly loved ad cared throughout its life!
Picture via Gary Johnson-Barker 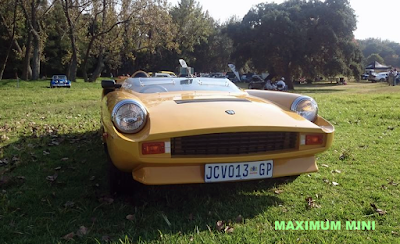