Coachbuilt Minis may have the strange habit to vanish but every now and then one does resurface. Reader Pete Flanagan (who sends in fascinating nuggets regularly) just briefed me about his latest find. He wrote: "I discovered an interesting Radford Mini in a barn a while ago and after some research it transpires that the car was once owned by Brian Epstein. Brian's company ordered the car (a red 998 Cooper) from Car Mart of Ealing in September 1965 and between that date and late 1966 when it was passed on to George Harrison's brother Peter, it was converted by Radford to a Mini de Ville GT. Peter Harrison kept the car until 1971, shortly before he moved down to London with his wife to help look after George's estate. Despite extensive research on Beatles Minis I have found no proof that Epstein ever used the Mini nor any of the Beatles but it's probably as close to a Beatles Mini as you can get without actually being one!" Well, well, thanks again Pete! A bit more about the Beatles Minis here, and John Lennon's (still missing...) in particular here. Oh! And if you want to own Pete's discovery, registered FGO 592C, have a look here.

UPDATE 28 June 2013: There is some news on the car, again via Pete: "After further research it transpires that it's unlikely that Epstein ever personally owned this Radford because according to Pauline Harrison she and Peter ordered the car from Earls Court Motor Show and it was merely purchased through Epstein's company at a discounted price, as many other non-Beatles associated cars were. They bought it new and probably didn't change the name on the logbook until some months later. The car is ex-Peter Harrison via Brian Epstein Automobiles to be completely correct but obviously Epstein's indirect association with it is being milked to the max by the auction house to fluff up the value ! There is no proof anywhere that this car was ever owned by Epstein himself and Pauline is sure he never did." Thanks again pal!

UPDATE 1 July 2013: Despite the dubious claim, the car did sell at auction with the hammer coming down at £22,000. That is approximately £26,000 including the buyers premium. The car is going to be restored. 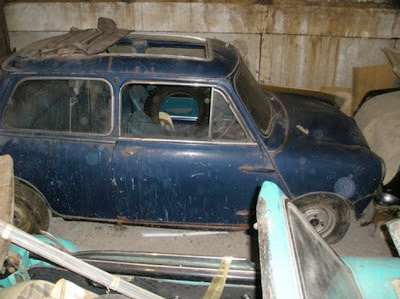