It's Le Mans 24-hours this weekend again, and I have a feeling Audi may buy win the title again. No news there, so let's go back to Le Mans chequered past once again, trying to dig up some more information from the golden days of Minis at Le Mans.

One thing that intrigued me for ages was a name that was on the left hand side wing of the 1967 Mini Marcos works racer. In fact there were four names, of which three are well-known as the car's drivers (Jem Marsh, Chris Lawrence and Tim Lalonde). But below these a mechanic was named, too, and I wondered who that could be. Unfortunately there appeared to be not one photo clear enough to figure out. And so, when Sparks came with a model of the car I was eager to buy it. These models are so detailed - I was convinced it would have the name written out on it's tiny 1:43 scale wing. And it had. When I put a magnifier on it I could make out 'Max Frentlin'. Great! Or was it? It didn't help a thing and I couldn't find any lead to a mechanic named Frentlin at all. Blast.

But then came my friend Alexander Trimmel from Vienna. Alexander had an original picture of the car in the paddock. A picture I'd only seen in a small format, printed in a French newspaper before. But this one was big, and all four names could be read clearly from it. Alexander made my day. Marsh, Lawrence and Lalonde, were there. As was the mechanic's name - not 'Max Frentlin' but 'Mike Treutlein'. I'm sure that, like me, Sparks' model makers were unable to identify it from the pictures known and thus made up a name that looked like the one that could vagualy be seen in these photograps.

Anyway: now that I knew the mecahanic's name, it was a matter of finding out if mister Treutlein was still about. To cut a long story short - he was. When in the UK some weeks ago I found him on an old airfield in Bedfordshire, where he still works on cars to this day. Classic cars now. Mike turned out to be a very nice man. What he told me? That's for the next time. 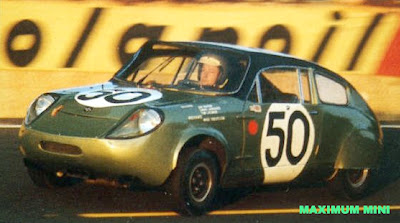 Well-known picture of the car at speed. But mechanic's name was impossible to be read from it
Picture Jeroen Booij archive 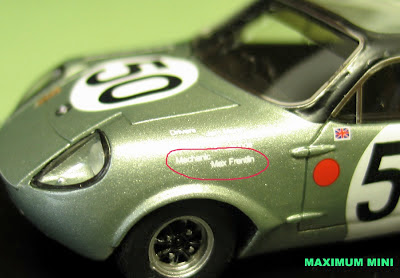 There it was in a 1:43 scale: 'Max Frentlin'. But Sparks made that name up and was wrong
Picture Jeroen Booij 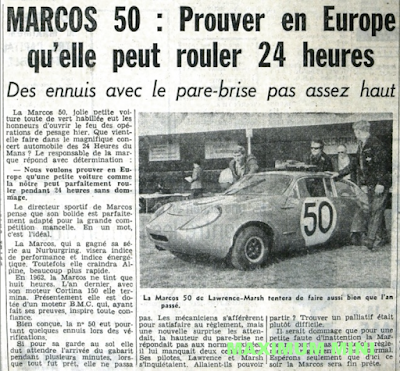 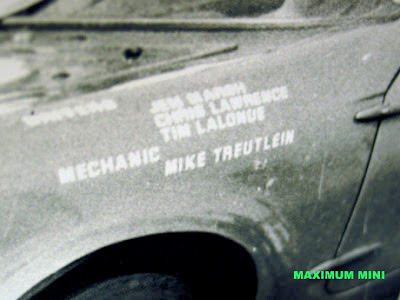 We've got him. Not Max Frentlin, but Mike Treutlein. Thanks to Alexander Trimmel
Picture Jeroen Booij archive