You may have heard of the Buckle Monaco - a fastback version of the good old Mini that was built in Brookvale, Australia between 1966 and 1967. And there was the Ecurie de Dez, too, a car of a similar coupe concept and also Australian, this time built in Salisbury South bewteen 1969 and 1970. Two cars alike. Would there be place for a third? It seems like someone at least thought so. I never found out more about the exploits of 'Automotive Refabrication Pty. Ltd.', other then the 1967 ad which you can see here. But I came across another picture of what I believe to be the same car more recently. The remarkable thing is that, like Buckle, this company was based in Brookvale, too. As a matter of fact it was just around the corner from Bill Buckle's workshop, or so Google Maps learned me. So was it a competitor who believed he could get a piece of the pie, too? Perhaps even an ex-Buckle employee who started on his own? Or was it somebody who decided to carry on with the project in 1967 after Buckle finished it..? 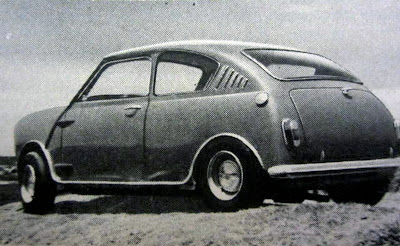 Air vents in c-post and boot with no number plate recess distinguishes it easily from others
picture courtesy oldholden.com