Did you see the Jimini 2 on eBay last week? Perhaps not as it only made a very brief appearance and was sold for the asking price right after it got on there. No surprise as it looked to be in excellent order and seemed cheap to me at 1,500 GBP. It had a good story, too. According to the seller "it was built in 1982 from a Mini pickup and first registered for the road in 1984. The owner used the car for two summers and then locked it away in his garage for 26 years until July 2012 when I acquired it. Apart from the upgrades and recommissioning, it is exactly as I bought it, including some 26 year old dust!" Who bought it?

Of course there is nothing mysterious about the Jimini. However, it's military appearance made me think of a true mystery Mini derivative. Other than that it is called a 'Mini Jeep' I do not know anything about that one. It looks pretty much home grown with its boxy shapes, odd proportions and ill-fitting roof but I'm quite sure I have seen another in yellow. Could it ever have been commercialised? 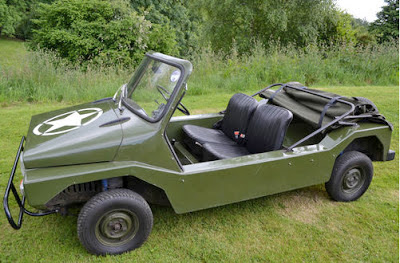 Excellent Jimini 2 looked like new. It sold last week for 1,500 GBP. A steal if you ask me
Picture courtesy ebay.co.uk 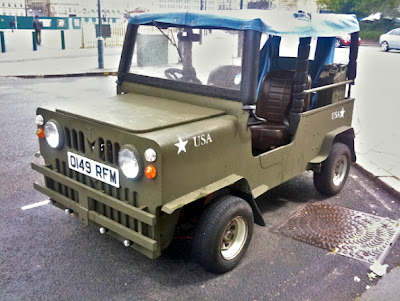 It made me think of this 'Mini Jeep'. It may look home-grown but I think more were made
Picture Jeroen Booij archive