Keeping with the snow-theme (Tuesday's Canadian ice racer here) let's have a look at a few more Mini based cars which were used or meant to be used in snow. First photograph comes from Scamp-boss Andrew MacLean. He added: "It's a publicity picture of one of the most successful Mini based RTVs, bought by Scottish Hydro-electricity in 1987/'88. Mini 1000 Automatic running through a pair of Triumph differentials with slightly modified and beefed up Mini suspension, LHD steering rack with extended arms and... drum-brakes all round! 15x15" Dunlop Treadlight Flotation Tyres leaving a footprint of only 3psi, so ideal for snow, shale, sandy beaches and mud!" More recently this car has been fully restored.
Second there's the Mini-Trac expedition vehicle, designed and built in 1965 for the Australian researchers based at the Wilkes Antarctic Station: one of the coldest and windiest places on earth. The Mini-Trac was built by Terry O’Hare who ran a coachbuilding company in Sunshine (!), just outside Melbourne. O’Hare used an Austin 850 and removed its original driveshafts, universal joints, hubs and suspension and had drive sprockets fitted to the differential output shafts, providing its 850 power independently to both tracks via chains. Two more Mini-Tracs were built, one went to New Zealand and the other to Canada, but all three haven’t been seen for decades. The Wilkes base was abandoned in 1969. Could they survive?
Last in line here is the Stimson Snow Bug, as it was drawn in 1969 or 1970 by the great Barry Stimson (he can't remember exactly). Barry was approached by an Austrian company to design a snow vehicle that could carry four people over snow and that would be cheap to build. Barry: “Snow mobiles were out there but they could only carry two persons. I did it as simple as I could make it. It would have had two rubber based tracks and to make it turn left you just put the brake on the right hand wheel, or the other way 'round'. Unfortunately it never left the sketch stadium after the Austrians lost interest." 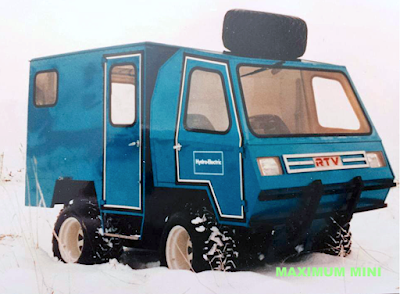 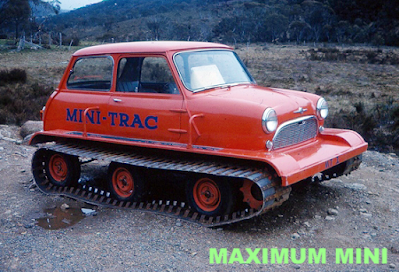 One of three Mini-Tracs, built for expeditions on Antarctica, in New-Zealand and Canada
Picture Jeroen Booij archive via Craig Watson 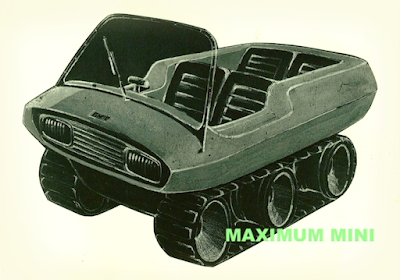