This is a story that I don't think many people will know about. It's about a once planned rebirth of the Mini Marcos under the Midas banner, probably in the mid- to late-1980s.
Fact is that a buck was made from an existing Mk4 Mini Marcos shell to make moulds for the new car. That never happened and the unfinished prototype / buck ended up in New Zealand after a Kiwi mechanic purchased it from the Midas factory and brought it back home with him with the idea of making something similar in NZ. And once again it was Graeme Farr to find out more about it. He even owned the thing for a while. Over to Graeme then:
"I bought it from a lady in Auckland who got it when she bought a house. It was under a deck which you can see in one of the photos. She was going to use it for a Guy Fawkes bonfire and I think she was lucky she didn't try! I paid $100 for it. It had been there some years before to look at it. The guy then said it was built with the idea of re-introducing the Mini Marcos under the Midas name. Hence the alterations. They had moved the hatch up the body a bit too. This was done in the UK by D&H Fibreglass Techniques. The Kiwi mechanic who'd purchased it was going to modify it further. I think he had gone to the factory with the idea of buying a Midas - but the Marcos was virtually free so he took that instead. I think he was a tenant in the Auckland house I brought it from - and I went to see it but it wasn't for sale."
"Then a year or two later I went to see if he was still there - and the lady said he had long gone. I said I had seen a car there - and she said it was still there! She said I could have it but I gave her $100 to have it clear that I bought it. She said the guy had gone back to the UK I think. I rang up a furniture removal company and they put it in the truck and brought it down to Wellington. I already had a Jem and always wanted a Marcos. But then another really original blue pre-hatch Irish Mk3 came up for sale and I bought that as well. So I had three of them! I sold this one to a mate for a few hundred dollars. He took off the body putty and moved back the the hatch to the original location. He fitted the Midas flares as I think some of the originals had been cut away, but it wasn't too bad as it was essentially a new shell. But he then sold it to Mini racer Robin Greenland who finished it as a classic race car. I think its painted Gulf colours now."
Unfortunately that means that every trace of the modifications once carried out by Midas Cars Ltd. to make it fit in with the Midas family have been removed. So this is the only evidence we have of what the Midas Cars Mini Marcos Mk5 would have looked like. It would be interesting to learn which car exactly it is, though, as that may help to put a date to it. A big thanks to Graeme Farr once more for sharing this information.
UPDATE 30 January 2021: I have been told the blue car (picture added below) is believed to be the same car today. Still unregistered, it is for sale too.
UPDATE 1 February 2021: Graeme confirms that the car wore no chassis number: "Yes it definitely is the same car as the blue one currently for sale. Robin who is selling it is a friend of mine. And also the shell had no chassis plate/number - and no evidence of where one had been fitted. The guy who bought it out from the UK said it was a shell they made specifically for the prototype buck as I think production had already stopped. That is why the Midas flares were the same colour." 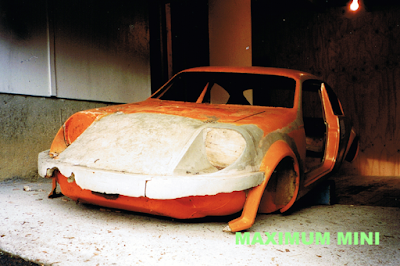 It's a Mini Marcos but not as we know it. This shell was turned into a prototype / buck by Midas Cars
Picture Graeme Farr 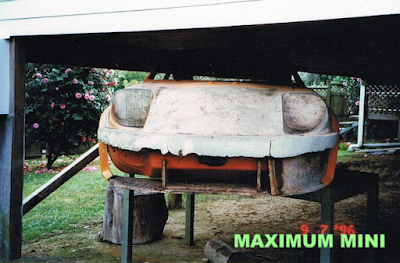 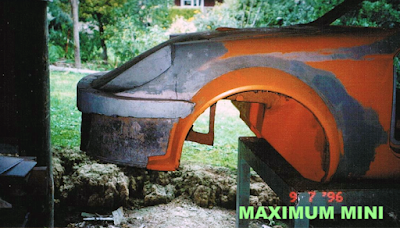 See the similarities to the Midas? It never happened though and the thing came to New Zealand only to be rescued from a bonfire by reader Graeme Farr
Picture Graeme Farr 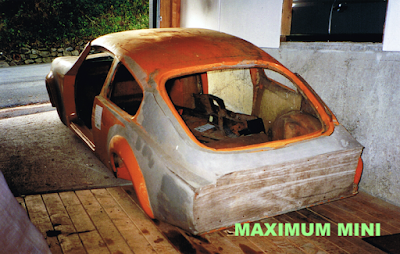 Back modified heavily also, even the hatchback door was repositioned and moved further up
Picture Graeme Farr 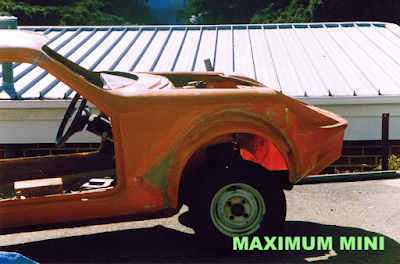 Graeme took it over in 1996, started a build but then sold it. All the mods were taken off later
Picture Graeme Farr 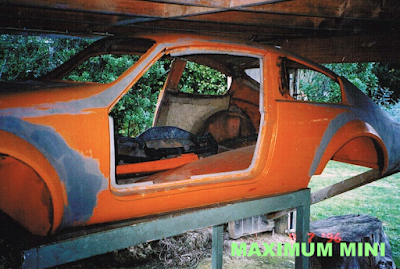 It must have been a late Mk4 shell, supposedly now a running car in NZ. Who knows more?
Picture Graeme Farr 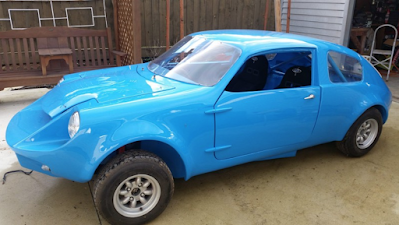 UPDATE: This is believed to be the car as it is today. Note cage and modified floors too
Picture Trademe.co.nz
Geplaatst door Maximum Mini op 13:20