So far it's not much of a winter here. In Canada it's a different story. In Huntsville, Ontario night temperatures reach -20 degrees now. Huntsville is where this Mini based ice racer was seen decades ago. From what I have been told it was photographed there, probably in 1966 while the picture appeared in print in 1967. The world wide web is remarkably quiet about a possible event there. Who knows more about it?
More ice racing? Another interesting Mini based ice racer was seen here a couple of years ago. Also: the Swedish Mini Marcos importer was an ice racing champion in his home country  (here). And then there's the story of an Ogle SX1000 being used for ice racing as well... Enjoy the winter! 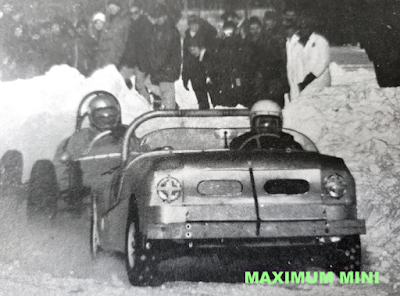