And the messages regarding the Mk1 Mini Jem that was auto crossed in the late 1970s and early 1980s continue to come in! (See here for part 1 and part 2). This time the news comes from the Hawkins family themselves, who auto crossed it. John Hawkins wrote: "Hi Jeroen. Great to see your articles. Here's our part. Jeff Hawkins was a local clubman driver from Neath, South Wales. He crossed over from road rallying to autocross which was popular in the 1970s to mid 1980s. He was employed at Cam Gears/TRW at Resolven and they sponsored the car. The Jem was bought for £150 via Motoring News as a basic rolling shell which had been used for autocross. It had a hand beaten basin for the drivers head to clear. It was featured in Rally Sport magazine quiz which asked 'What type of car is this?', complete with Cam paint colours."

"We developed the car by swapping all running gear from our Mini. 'S' front brakes, alloy rear back axle, full cage, which was our own design, with the top extended to top subframe mounts. This was to stop the windscreen moving, as pointed out by Ian, as the front pillar had internal damage. Engines ranged from 1,310 - 1,340 - 1297 to 1293. Jeff was a class E BTRDA champion front wheel drive over 1300 class. We also built our own Mk2 Mini Jem road car, which we purchased from London. This was registered 'AAR 8K', which we eventually sold in the 1970s in the Cardiff area (that raises another question!-JB). I have attached two photos but am in the process of digging out more. Thanks. John." Well, thank you John, for clearing up a bit more of a most intriguing autocross entry! 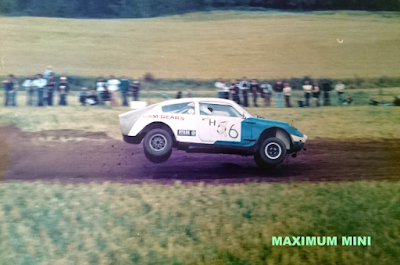 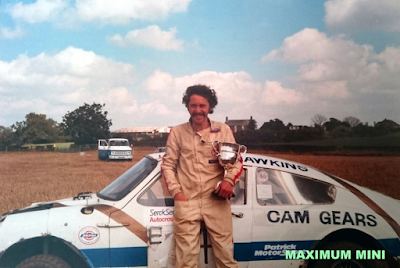 Jeff Hawkins worked at Cam Gears/TRW and became BTRDA champion in the front wheel drive over 1300 class - Class E. Seen here with one of his trophies and the Mk1 Mini Jem
Picture courtesy John Hawkins