Preparation work on the Le Mans car is in full swing, and the best news may be that I have now signed a contract with an engine builder. It took me some time to consider and reconsider things (it's going to cost me an arm and a leg - another!) but I think this little car deserves the right built. And I believe Philippe Quirière of France is just the man to do so. Philippe runs Mini World Center in Serres-Castet in south-western France. His father started the company after having bought, raced and tuned his first Mini Cooper in 1964, so there is no shortage of experience. During the last Rallye Monte Carlo Historique, four Mini Coopers and Cooper 'S's were prepared by Philippe. What's more: he has an impressive stock, having taken over parts from several French tuners and specialists. One of the persons he took over truckloads of bits from is José Albertini, who actually owned the Le Mans car in 1970. I got in touch with José some two months ago, when he told me he'd kept several original parts from my car for ages, until selling them to Philippe about a year ago. Among them the car's original wheels. So not just the same type of early magnesium Minilites, but the actual ones that were fitted to the car when driven at Le Mans in 1966! And it's not just one set, but two of them, both magnesium; one with the groove and one without, as they can be seen on many historic photographs with the grooved ones on the front and the smooth ones on the back. (UPDATE: the grooved ones are not Minilites but are very rare wheels made by Cghris Lawrence and John A. Pearce, more here)

Then there is the engine, of which I will tell you more in the near future. What I can say for now is that Philippe will use a 1275 Cooper 'S' block that is believed to have ran under a thousand kilometers from new. Try to find that! The crankshaft that is going to be used is quite something, too. This is an AEG 480 Cooper 'S' crank that was bought in 1968 by Jose Albertini from Jim Whitehouse, who'd bought it two years before directly from BMC's Special Tuning department in Abingdon. Whitehouse was, of course, the man who set up Arden Engineering and developed the 8-port head, of which he sold the patent to BMC in 1967. The crank for my car has never seen use. The AEA 649 Cooper 'S' camshaft that Philippe will use also comes from the new old stock of Albertini.

But I get carried away by all this exiting mechanical news. First I need to work on the car's body. Quite a job on its own. I have started sanding down the layers of paint, which turns out to be kind of nightmarish. The original layer of blue and yellow as well as the white racing roundels are sprayed on as thin as they get, and the same goes for the next layers (light blue, green, orangey-red, maroon). However, then there are two more layers of red, which are considerably thicker and on top of that there is a massive layer of primer. Even with a very rough sanding paper it takes ages to get that off! Never the less it was fun to do it at places where I knew there should be a hole, and then discover it, too! I'll try to get off as many of it in order to show it nicely at Blyton Park, without upsetting the neighbors too much here... 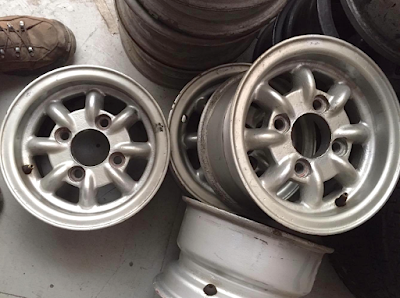 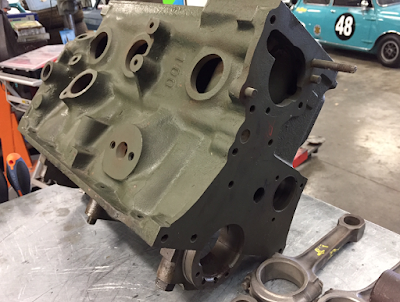 The Cooper 'S' block for the car. It has run a thousand kilometers at maximum. When do you find that?
Picture Philippe Quirière 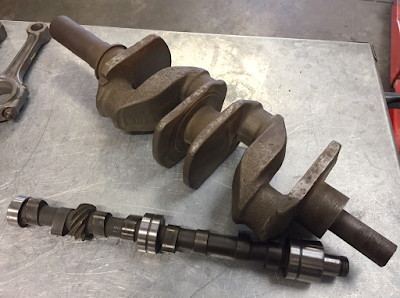 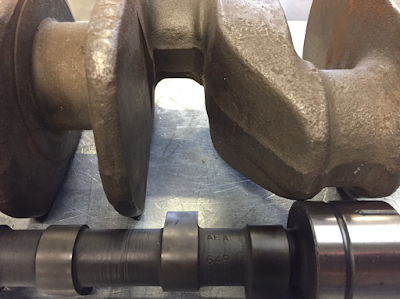