These two pictures were posted on Facebook recently but unfortunately I don't know whose photos they are, so do let me know if it was you. Interestingly, they show the Hamlin Mini Special that was made by New Zealand Mini racer Frank Hamlin in the mid-1960s. The car was supposedly raced with success, although Frank may have been just a little too enthusiastic on the day these photos were taken. It looks to me the front conversion was carried out in aluminium? Also: apart from Hamlin's name on the front wing I can also read: 'Tuning: XXX Charles Ltd". Who knows what should be in place of those X's?, I can't find anything more on it. Any more information is much appreciated.

UPDATE 12 JUNE: I understand it is Frank Hamlin rather than Hamblin (amended in the article now). Ken Douglas sent a whole bunch of photographs and wrote: "The remnants of Frank's first Sprint (grey one) are currently owned by Neil Whiteing and I hear rumours that it is being restored. It had several owners after Frank and the most notable was the late motoring journalist and photographer Robin Curtis who converted it back into a road going car and used it to travel around the country for many years while reporting on and photographing Motorsport events around the country. It even featured as a charicature in the top corner of the front page of his "Motoraction" motorsport monthly news paper / magazine." Thank you very much Ken!

UPDATE 16 JUNE: All possible information in word and images now to be found here. 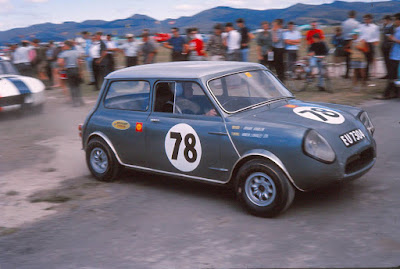 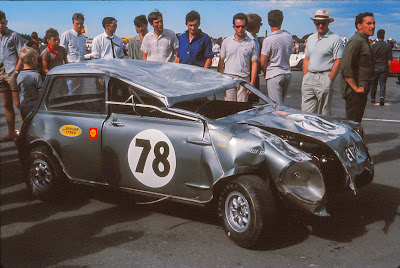 Not much later the car looks like this... What went wrong? And what else do we know about it?
Picture source unknown