I'm sad to have learned that another legendary Mini Marcos man passed away yesterday: Mike Garton (1936-2020). Mike was known as a top motor sport scrutineer for much of his life but had raced himself previously also, mostly Austin-Healey Sprites. He even became the author of one of the standard works about modifying Sprites and Midgets, a book titled 'Tuning BMC Sportscars'.

But together with Marcos works mechanic Mike Treutlein, Garton was also deeply involved with the build of the two 1967 Mini Marcoses that became known as the '67 Le Mans car and the FLIRT car. After I found the 1966 Le Mans car, Mike contacted me and we had a nice correspondence about these cars, with Mike revealing some invaluable information. This is what he wrote about the '67 car some time ago:

"Hi Jeroen, Been a bit busy with the Historics, thought, for accuracy, I should confirm facts. The two cars Mike T and I specially built at Marcos (Mike and I have been friends since we were 16 and remain so today) he was my race mechanic with Sprites and Chevrons. He was elected a Mechanic member of the BRDC on my proposal. I was then Production/Sales Manager for Marcos I brought Mike T in for the project FLIRT to build two Special cars for Le Mans based on the production GRP shells. The marine ply stiffeners were replaced in the moulds with balsa wood. No other changes to the Novaplas GRP shells were made except that the mounting points for the steering rack were ground away. No 'double floors' were introduced. The rack was mounted on a steel plate with retaining cups, bolted to the front sub frame. This eliminated the bump steer inherent to the production cars as the front bulkhead 'panted' in use. A small diameter hoop bonded into all the shells remained - we did not mould in or fix any other type of ROPS (Roll Over Protection System - JB) I know. When built, I did all testing at Castle Combe and subsequently raced at Nurburgring and Mugello. The bodywork for the two cars was all GRP including the new front section and rear wheel spats. NO aluminium was ever used until the ACO insisted the screen height had to be increased on the Le Mans entry. Achieved on HHU 34 D only, by altering the screen angle, moulding in a small section of aluminium to fill the gaps, result was effective but crude. The two cars were a privately funded project, not by Marsh, to race a team of three girls under the name FLIRT - Fast Ladies International Racing Team. When the ACO decided against a team of girls it was decided the project would continue the rest is history. HHU 34 D was in South Africa for some years with later an American owner I believe. Any information you may have seen, given or changes introduced by owners to their cars were not by Marcos, probably not period either. Regards Mike"

I will make an overview of the '67 Le Mans car's history based on photographs from the files in a next article. For now I wish Mike's friends and family all the best with their loss. 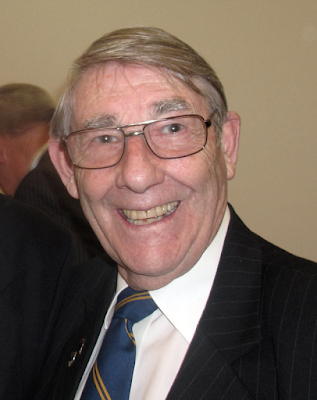 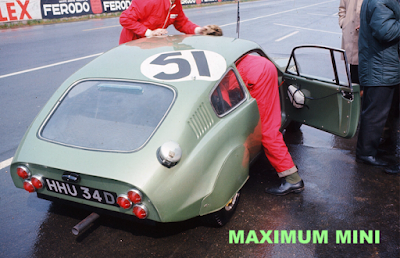 The 1967 Le Mans Mini Marcos on the test weekend in April that year.
Those two mechanics may well be Mike Garton and his life-long friend Mike Treutlein
Picture Jeroen Booij archive